SMC first fielded a women’s team in 1977-78, the “Roadrunnerettes.” Coach Tom Barnes came from Ellsworth Community College in Iowa to take charge of a program that won four games. His first two seasons SMC turned it around to 46-23, finishing fifth in the 1992 national tournament. 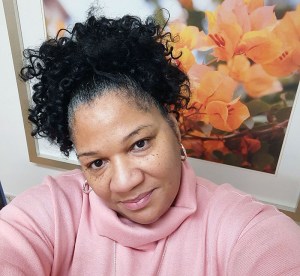 “We had a great season with a record of 28-0,” said Barnes, voted the Western Collegiate Conference and Michigan Community College Athletic Association Coach of the Year. “We went to Toledo to the tournament hoping to win, but unfortunately stubbed our toe.”

Though SMC captured the MCCAA championship, it lost at regionals to two teams the Roadrunners beat twice each during the regular season.

SMC’s women still hold the NJCAA mark for field goal percentage of 70.5 percent (442 of 627) in 28 1996-97 games. SMC’s Beth Blake also occupies a spot in the record book as 1994 national-tournament MVP. The 1994 national championship trophy is displayed in the SMC History Gallery.

Thigpen continued to her bachelor’s degree while playing in 1995-97 for the Mid-American Conference’s Northern Illinois University in DeKalb. Her daughter, A’Jah, currently plays for the Huskies.

A’Jah’s brother, Luke Davis III, was a DeKalb Barb (barbed wire was invented in DeKalb), then played for Dubuque University in Iowa.

A’Jah played her freshman year at DeKalb High School, then three years at Monteverde, Florida, Academy for Huskies great E.C. Hill, a NIU women’s basketball assistant for six seasons, 2005-11. E.C. and Noopie played against each other at least six times in high school in Chicago.

“I’m definitely trying to go after what [my mother] did and do it better,” one news story quoted A’Jah about coming home to play for the Huskies. “I feel like she left her legacy here, so I’m back, and I want to do it as well.”

A’Jah, who this month hosts her first basketball camp in DeKalb, in March tied her career-high with 21 points in the MAC Tournament quarterfinals against Central Michigan, adding a game-high 11 rebounds. In 2020-21, A’Jah started 20 of 21 games, led NIU with eight boards per game to finish fifth in the MAC in rebounding and second on her team, scoring 11 points per game.

By the time Thigpen, who is now a grandmother, finished playing in 1997, turning professional in the WNBA was an option. She believes she could have, but “I played basketball to get an education.” Plus, she is “rooted in old-school basketball,” which makes her prefer the college game to the pros, who rely too much on sharpshooters trading three-pointers.

“Defense went out the window,” Thigpen said. “Take away the (three-point) line. It’s a team sport. If you want to be an individual, go play golf.”

Thigpen said her great-grandmother bestowed the nickname “Noopie,” which stuck because many struggle to pronounce Herilanda.

Since 1998, the sociology major has been director of education and training for Avancer Homes, which operates 18 residences with skilled supervision for adults with disabilities.

Thigpen played in high school for Dorothy Gaters’ Commandos at John Marshall Metropolitan High School in East Garfield Park on the west side of Chicago. Gaters is Illinois’ winningest coach — boys or girls — with 1,155 victories in 45 years.

“Dowagiac found me” in the form of Barnes, “a true fan of Chicago basketball.” She talks to him regularly and keeps in contact with her teammates through Facebook.

“I have always been the glue that has kept up with all of my teammates from that era,” said Thigpen, who volunteer-coached Amateur Athletic Union teams. “It has always been about family for me, and those ladies were definitely a part of my family.”

She is excited about NJCAA basketball returning in 2022 and the $2 million plan to renovate the gymnasium and add “The Nest,” a glassed-in upper level.

“Build for the future, not the present,” she said. “I’d love to come over and see how Dowagiac has changed.”