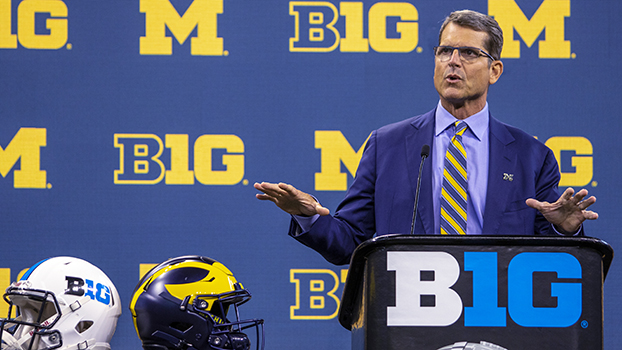 INDIANAPOLIS, Ind. — When Michigan Head Coach Jim Harbaugh took the podium at Big Ten Media Days in late July, the questions ranged from new coaching hires to who would be the next Wolverine quarterback.

Michigan is coming off what many consider another sub-par performance. The Wolverines were 2-4 last season in the Big Ten Conference, which only played league games due to COVID-19. Michigan also lost to rivals Michigan State and Ohio State, something that does not sit well with the Wolverine faithful.

Among the coaching changes was Sherrone Moore, who replaces Ed Warinner as the offensive line coach. Warinner moves to the co-offensive coordinator position.

Ron Bellemy and Jay Harbaugh were also added to the staff. Bellemy will coach wide receivers, and Harbaugh will coach tight ends.

“So, there’s a been a number of new hires on the coaching staff,” Harbaugh said. “The thing that I think they all have in common is just what they know about football, their experience, the teachers that they are. And the other thing is just how they have come together, really, the trust.”

Since last season, the Wolverine lost quarterbacks Shea Patterson and Joe Milton, who transferred. That does not mean the cupboard is bare at Michigan.

“Some of the great qualities that you need as quarterback, being able to move the team, being able to put points on the board, making everyone else better, those are the things you look for in a quarterback,” Harbaugh said. “[They are] somebody that takes command, is the leading on the field when the offense is out there — kind of the 12th man, trying to put guys in a position to be successful. But that quarterback is the straw that stirs the drink.”

“He has done a tremendous job,” he said. “He played in some games last year and did very well, went through spring practice and was outstanding. So, he’s our No. 1 quarterback going into camp.”

How is Michigan going to improve its defense?

“I hadn’t been around Mike a lot, except the times I had gone to Baltimore and visited there and talked some football,” Jim Harbaugh said. “My brother, John, was like, yeah, this is the guy I would hire and probably would be our next defensive coordinator here in Baltimore. And what he liked about him, what he told me when I asked him what he liked about him, he said he’s really smart. He was in on the ground floor of the Ravens when they changed their defense, invented their defense and their scheme. [He is] very detailed and a very good teacher.”

The other question looming over Harbaugh and the Wolverines’ heads is when are they going to beat Ohio State and play for a Big Ten championship.

“Well I’m here before you, I’m as enthusiastic excited as I ever am, always am, even more, to have at it, to win the championship,” he said. “To beat Ohio State, our rival is Michigan State, everybody, that’s what we want to do. And we’re going to do it or die trying, you know. I was talking to my daughter this summer. We were climbing — Sarah, Addy and I — were going up this mountain, it was like a mountain climb. I don’t know how high it was, but it was pretty high. We probably did 15,000 steps to get up there, she was counting it on her phone. And we were getting up close to the top, and I remember she said when we got to apex, ‘Dad, we got to get to the top.’ You’re darn right we do. We got to get there. That’s what we got to do. We got apex, we got to get to the top. She’s got that gene in her, and I was darn glad to see it and to tell you, I got that gene in me. We’ve [the team] got that gene in us. We have got to get to the top.”

Michigan kicks off the 2021 season by hosting Western Michigan University at noon on Sept. 4.