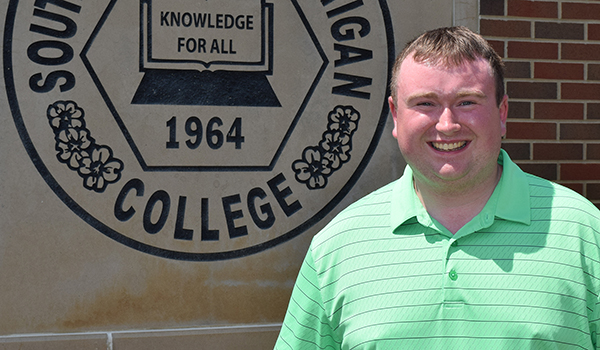 After student teaching in Zeeland, he is returning to his alma mater on the other side of the desk at Dowagiac Middle School.

When asked at SMC’s Honors Program Academic Open House on Dec. 6, 2016, about his career plans, Brogan specified he intended to become a math teacher like his DUHS instructor, Keith Klann.

When SMC President Dr. Joe Odenwald wrote a column about community colleges, he could have been talking about Brogan.

“One of the reasons I chose community college administration is that graduates, more so than those of the universities, remain and flourish in the communities which our campuses serve. They are the teachers, law enforcement officers and nurses we interact with daily,” Odenwald wrote.

“To be able to come back to the Dowagiac community, I’m very excited,” Brogan said, “and to be able to give back to the same community that gave me my opportunity to go to SMC and to Grand Valley for my associate and bachelor’s degrees, respectively, is something I want to make sure every Dowagiac student has that same chance.

“It was a conscious decision,” Brogan said. “I remember that discussion in December 2016. I had Keith for freshman geometry and senior Calculus I. He was a great mentor to me, and I really fell in love with math. He provided me an opportunity to teach students in his Algebra I class senior year, and that’s when I decided to pursue teaching as a career” instead of archaeology.

Brogan will be teaching seventh-grade math at DMS. His seventh-grade teacher, Andrew Hackett, is now a colleague, too, though, like Klann, at DUHS.

“I attribute that opportunity to my success at Grand Valley,” Brogan said. “I hadn’t heard of a community college being able to have an Honors Program. That’s something you don’t typically see until you get to a four-year university.”

Brogan, who played golf and tennis for the Chieftains, golfed in the 17th annual Ascension Borgess-Lee Foundation outing July 15 at Indian Lake Hills Golf Course, where he also worked this summer.

“A lot of great people, professors and staff, work here,” he said. “If you ever need help, there’s always someone you can turn to. It’s always been a welcoming community. The direct interactions you get here with faculty are different from what you get at a four-year university. The faculty have their doors open so you can walk in and have a conversation about anything. I’m very glad I came here for my associate degree. Even if I hadn’t been dual-enrolled, I would have come here because it was cheaper to get my general credits and it’s only a few minutes from my house.”

Brogan interviewed with the district in June, first with DMS Principal Dr. Sean Wightman. Second, he taught a lesson so officials could see him in action. Finally, he met with Superintendent Dr. Jonathan Whan.

“The classroom I’m in is the same math classroom I was in in sixth grade with Miss (Jenni) Allen, now Mrs. Winters. Being able to work with students in this community is something I’ve looked forward to since my hiring in July. It’s always been really cool for me to see where people go when they leave Dowagiac because they travel far, but I decided to be one of those who stays and gives back to the community. I was very excited to accept the position and to represent Dowagiac one more time. I know this community well and can step back in as a teacher and connect with students.”

As for announcing his return to Klann, “He was one of the five people in my second interview, watching me teach.”