Fighting Irish get to work in preparation for 2021 season 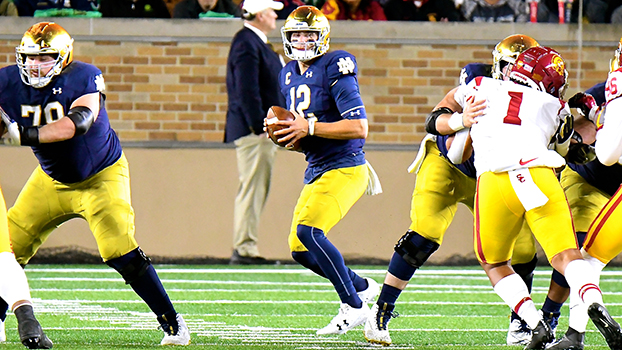 One of the big questions facing Notre Dame as it opens fall camp is who will replace quarterback Ian Book. (Leader file photo)

The Fighting Irish are preparing for the 2021 college football season, which should be a bit smoother than the 2020 season, which was dominated by COVID-19.

Notre Dame returns to being an independent after spending last season as a member of the Atlantic Coast Conference.

Fighting Irish Head Coach Brian Kelly faced the usual questions about starters, how he feels the season will go, and even about the recent rise of COVID-19 cases due to the Delta variant.
One of the biggest question marks surrounding the program is who will replace Ian Book as quarterback at Notre Dame. Always a hot topic, it was one of the first questions had to answer.
Kelly was asked if picking a starting quarterback early in camp was key.

“I would normally say that it is really important,” he said, “but all these guys, and in particular Drew [Pyne] and Jack [Coan], have a lot of respect, and our guys will be ready to go with either one of them in particular. Tyler [Buchner] is a young kid, and there would be more preparation needed there. And so, from that perspective, I don’t know that this is one that, hey, the guys are going to be unfamiliar.

“But we just feel like we’ve got a pretty good sense of where this is going to go, and we want to make sure that we’re going to make the right decision and give everybody the chance over the next week to make their case.”

The senior Powlus is currently the associate athletics director of football at Notre Dame. Powlus, who was also an assistant coach for the Fighting Irish, was a four-year starter [1994-1997] and a two-time captain. He set 20 school records at Notre Dame and played in all 44 games over the four seasons, plus a pair of bowl games.

After battling through all the issues that arose from COVID-19 in 2020, Kelly and the Fighting Irish were hoping that 2021 would be much easier to navigate. Earlier in the year, that would have been true, but with the spike in cases, hospitalizations and deaths due mainly to the Delta variant, college football may not be out of the wood just yet.

“Look, we’re prepared, because we went through it last year, to wear masks, social distance, do all the things because unfortunately, we had to go through that,” he said. “We’ve also set into motion all those things, if, in fact, we need to get to it. The good news is we’re 95 percent vaccinated with our team. With the new NCAA rules and regulations, we could need — well right now, we would not have a scenario that with the small number of unvaccinated that we do have through exceptions if they did get sick, it would not cause a test of our vaccinated, which is the big issue here.”

Kelly added that because of that, players and coaches are not required to wear masks during practice, but should anything change, the program is ready to do whatever it takes to get through the season.

As for his impressions of the open game of fall camp, Kelly said it was interesting.

How did the players react to the first day of workouts?

“I really liked the way they went about practice,” Kelly said. “It wasn’t about winning the drill per se relative to production. It was much more about how is my technique, did I execute it the right way, and so their mindset was excellent in that way. So, I leave the practice going, man, they get it.”

Notre Dame, ranked No. 7 in the first USA Today/AFCA Coaches Poll, will open the 2021 season on the road in Tallahassee, Florida, where it will face Florida State Sept. 5. The Fighting Irish will host Toledo at Notre Dame Stadium Sept. 11.