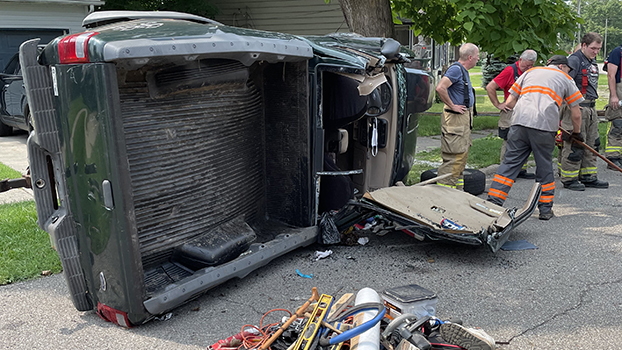 DOWAGIAC — Dowagiac Police were dispatched to the scene of a personal injury traffic crash on West High Street near South Lowe Street at approximately 1:30 p.m. Tuesday.

Upon arrival, officers located one vehicle on its side with two occupants inside.

Officers were advised that the driver of the second vehicle had fled the scene after the crash. Officers searched the area and were able to locate that driver a few blocks from the scene.

He was taken into custody at that time. Both occupants of the vehicle were extricated from the vehicle by the Dowagiac Fire Department.

The driver of the slower vehicle, Frank Fowlkes, 74, of Dowagiac, was transported to South Bend Memorial Hospital by Pride Ambulance. He was later released with minor injuries. The passenger, Danny Whitmyer, 59, of Dowagiac, was checked and refused treatment at the scene.

Dowagiac Police arrested a 37-year-old male suspect from Decatur for leaving the scene of a personal injury crash, reckless driving, and driving with a revoked license. The suspect was medically cleared at Ascension Borgess Lee Memorial Hospital and was lodged at the Cass County Jail on the above charges.

All charges are pending authorization from the Cass County Prosecutor’s Office. The name of the suspect is being withheld until his arraignment. It is unknown if alcohol or drugs were a factor in this crash and is currently under investigation.