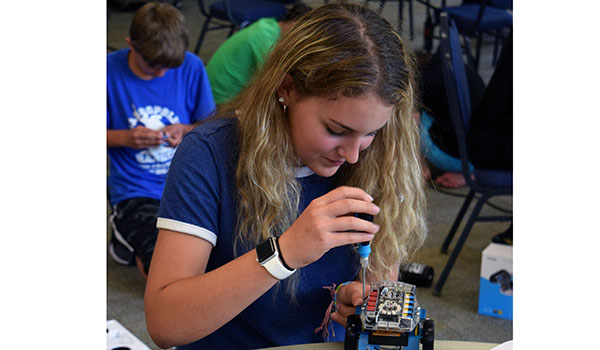 Whether it was building “brush bots” from a motorized toothbrush for racing or assembling a footlocker from a pile of panels to store their credit card-sized Raspberry Pi computers, Teaching through Technology Alliance trainers Corey Simpson of Idaho’s Boise State University and Jon Larsen, of Omaha, Nebraska, put the proverbial cart before the horse.

Directions were intentionally vague, from the first bullet point, “Don’t use any instructions,” to the fifth of seven, “Pay attention to your feelings,” in service of the third, “Practice your growth mindset.”

“You’re going to do things this week that are going to be hard,” ETS Advisor/Tutor-Mentor Coordinator Bethani Eichel said. “Not everything’s going to be easy because you haven’t done this before, but try to stay confident and keep a growth mindset.”

Growth mindset is the single most important predictor of how far a student will go in a Science, Technology, Engineering and Mathematics career field. STEM careers have grown 79 percent since 1990.

Learning to reframe failure as learning opportunities is how T3 Alliance students tackle societal problems. T3 Alliance is in 72 institutions in 36 states, plus the United Kingdom and Kenya.

Feeling frustration is when learning occurs, camp organizers said. A growth mindset creates a passion for learning rather than a hunger for approval. Human qualities such as intelligence and creativity, even love and friendship, can be cultivated through deliberate practice.

On Tuesday, students worked with temperature, distance and motion sensors, coding them with their Raspberry Pi computers. They practiced Node-RED, a programming tool for wiring together hardware devices, APIs (Application Programming Interfaces) and online services.

“I brought a few sensors you don’t have in your kits,” Simpson said. “By plugging this relay switch into your Raspberry Pi, you can turn lights on and off. This one that looks like a thumbprint is a touch sensor. My favorite is one of my students is building a game for cats to chase a laser pointer.”

Another of Simpson’s students built a grow tower to water hydroponic plants.

“There is a heap of sensors you can connect to a Raspberry Pi or other computers. We’re introducing a few to get you started with using sensors to solve problems,” Simpson said. “I helped a colleague in Maui install a camera on a Raspberry Pi to catch a young man coming into her house to steal money.”

But technology need not be electronic. It’s the sum of techniques, skills, methods and processes used in production of goods or services or in the accomplishment of objectives, from basic tools to communication developments such as the printing press, telephones and the Internet.

“Tools, machines and systems expand human ability to control and modify the environment,” Simpson said. “We tweak things in our own homes all the time to make our lives better.”

On Wednesday, the day President Dr. Joe Odenwald dropped in, they turned to making custom name badges for each student on four 3D printers ETS obtained as part of the STEM Camp supplemental grant.

The camp concluded in Chicago on Friday at the Museum of Science and Industry.

“I felt the students were able to make some needed connections between the content they learned throughout the week and real-world applications that were presented at the museum,” ETS Director Maria Kulka said. “Overall, it was a good culminating experience to mark the end of STEM Camp.”