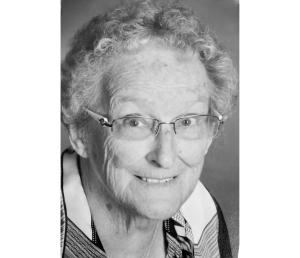 She was born on Aug. 18, 1929, in Sioux City, Iowa to Fritz August and Hedwig Henrietta (Henning) Nitz. She attended East High School in Sioux City and was a member of the Marching Band and Choir. Upon graduation she moved to Chicago and was employed at Kemper Insurance in 1947. On Sept. 4, 1948, at Saint Thomas of Canterbury Church in Chicago, Anna married Ronald Ethan Shelton. They shared 64 wonderful years together.

Anna was a member of Saint Mary Catholic Church in Niles. She originally planned a career in Nursing before meeting Ronald and ended up fulfilling that role upon the birth of 12 children within 20 years. Anna became the hub of the wheel for the family. Endless hours of love demonstrated through cooking, baking, sewing, gardening, canning, freezing, planting flowers, etc. but above all listening. She was known for her cooking, and regardless of the number of visitors she found food to prepare for everyone.

She worked the Farm alongside her husband and family including handling the bookkeeping. She traveled to Sioux City with Ron and the children many times to visit her family. Camping with the family eventually turned to having free time with Ron in their motorhome. She loved writing letters to family and friends, ice-skating, cross-country skiing and attending Chicago Cubs games. Anna’s passion to be a Nurse was fulfilled raising her family, helping with the Grandkids and taking care of her parents and Aunt and Uncle at home till their passing. She was the true definition of a Caregiver.

She volunteered in the office of Hospice at Home and served for many years as the Director of the Funeral Committee at Saint Mary’s.

She was preceded in death by her husband Ronald in 2013, her daughter, Denise Shelton, in 1988; two sons, Dale Shelton in 1976 and Tom Shelton in 1992; her mother and father, Hedwig and Fritz Nitz; and her sister, Margaret Harvey.

The visitation for Anna will be on Friday, Aug. 13, 2021, at North Lake Event Center, 10577 Jones Road, Berrien Springs, (next to Anna’s home) from 5 until 8 p.m. preceded by a Recitation of the Rosary at 4:30 p.m. The Mass of Christian Burial for Anna Shelton will be celebrated at 11 a.m. on Saturday, Aug. 14, 2021, at the Saint Mary Catholic Church, 203 S. Lincoln Ave. in Niles, Michigan by Father Christian Johnston and assisted by Deacon Roger Gregorski. Committal Rites will follow at Calvary Cemetery in Niles. The service will be livestreamed on the Halbritter-Wickens Facebook page at: facebook.com/halbritterwickensfuneralservices.

At 1 p.m. on Saturday a Celebration of Life and Luncheon will be held at North Lake Event Center, 10577 Jones Rd, Berrien Springs.

Arrangements were made at the Halbritter-Wickens Funeral Home, 615 East Main Street in Niles. Online condolences may be left at: halbritterwickens.com.