Buchanan turns out to cheer for their hometown hero 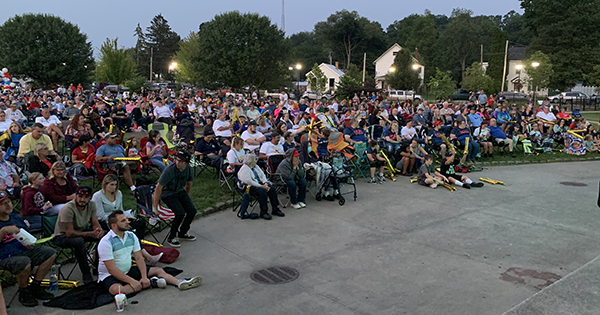 BUCHANAN — The community of Buchanan showed how proud it was of 2019 graduate Hannah Roberts as approximately 1,400 family, friends and local residents flocked to the Commons to watch her go for the gold last Saturday night.

The Roberts family originally planned on having a small gathering of family and friends to watch the World Champion attempt to win the first-ever Olympic Gold Medal in BMX Freestyle at the Tokyo Games. Instead, they decided to allow community members and area residents to come and watch the competition at the Buchanan Common.

According to Betty Roberts, the crowd was bigger than expected.

“We thought about 50 people would show up,” Roberts said after he daughter won the Silver Medal. “This turn out is amazing. This is crazy.”

As with many other watch parties throughout the U.S., NBC had a live feed of Buchanan during the competition. According to Roberts, NBC said that it was the largest viewing party by far for the Olympic Games.

The crowd erupted as Hannah Roberts made her first of two runs in the competition, blowing away the competition with a 96.1. The second run would not go as expected as she pulled up after injuring her foot. She did not complete the run, but she earned the Silver Medal based on her first-round score.

Great Britain’s Charlotte Worthington, who crashed on her first run, went from last place to first place with a score of 97.6 on the second attempt, which won her the Gold Medal.

Betty Roberts was proud of her daughter’s effort, and a bit relieved that the event was finally over.

“I was so excited,” she said. “The stress was crazy. She ended like she needed to. She could have rode on, but she decided that she hurt her foot, so she let it go.”

Father Rick Roberts was equally proud of his daughter.

“We could not be prouder of what she has accomplished as an athlete,” he said. “It is a big event. We are all nervous, but we couldn’t be prouder of her.”