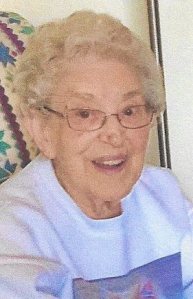 She moved to Ludington, Michigan in 1924 when her father was called to join the Presbyterian and Congregational churches into one church, the Community Church of Ludington. He died in 1926 when Peg was just two and half years old. Peg and her two older siblings were raised by their mother, who took a job as an elementary teacher to support the family. Peg graduated from Ludington High School as Salutatorian of the class of 1941. Ludington remained Peg’s favorite place for her entire life. For many adult years, her little cottage, Peg’s Playhouse, on a bluff on Lake Michigan near Buttersville, was enjoyed by her nieces and nephews and many friends. She graduated from Western Michigan College of Education (now University) in 1945 and took a job as a K-12 physical education teacher in St. Clair, Michigan for two years. She then taught physical education in Niles, Michigan from 1947 to 1980 with a one semester break while she earned her master’s degree from the University of Michigan. As a teacher, among other things, she sponsored the cheerleaders, the Girls Athletic Association and the Ushers Club. In 2014, she was one of the first honored as a Viking Legend educator by the Niles Education Foundation.

After retirement from teaching, Peg was deeply involved in her churches, visiting the homebound and becoming involved in and leading various church activities. She was a Deacon and Elder in the Presbyterian Church in Niles, was currently a member of the Community Church in Ludington and previously a member of Oshtemo United Methodist Church. She enjoyed two years as part of the GOAL (Gift of a Lifetime) program, working with older adults at the Presbyterian Church in Lawrence, Massachusetts. During her time there, she made many friends and happy memories, particularly buying her “Primitive” cabin in New Hampshire in the foothills of the White Mountains which she named Teddy Bear Hollow. She returned to that cabin most summers until 1996, when she sold it. Many good times were enjoyed there with the host of family and friends who visited over the years. She especially liked camping at Dolly Copp and the one time five hour climb up Mt. Washington in New Hampshire at the age of 71.

Peg enjoyed all sports, especially volleyball, softball and women’s basketball at Western Michigan, loved to camp whenever and wherever she could, and was physically active until her last couple of years, walking daily. She was a role model for her students, several of whom became physical education teachers and who were her “kids”. In 2012, Peg was an Honor Academy inductee in recognition of her outstanding professional accomplishments, contributions and service to physical education by the Department of Human Performance and Health Education, formerly the physical education department at WMU. She kept in close contact with many former students, friends, and family and always sent cards for every special occasion and holiday. She was loved and admired by many and will be missed.

Arrangements have been entrusted to Oak Grove Funeral Home of Ludington, oakgroveludington.com.