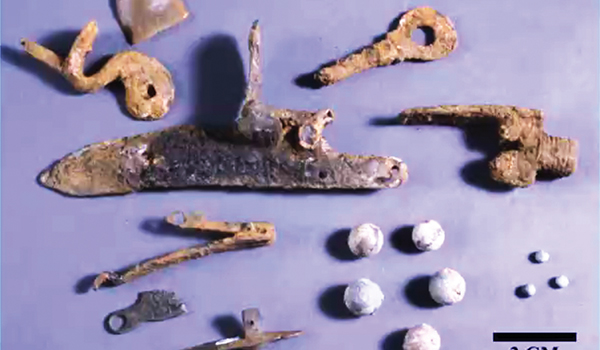 NILES — One of the most important families to the settlement of the Niles area was the hot topic of Wednesday’s Fort St. Joseph Summer Archaeological Virtual
Lecture Series.

Loraine DiCerbo, editor at Habitant Heritage and the French-Canadian Heritage Society, was this week’s guest speaker. Her presentation, titled “A Retrospective of the Chevalier Family, Their Roles, and Relationships at Fort St. Joseph: 1730-1780,” detailed the influence and impact the Chevalier family had on the fort during the 18th century.

The lecture, hosted by the Niles District Library via Zoom in conjunction with the Fort St. Joseph Archaeological Project and the Niles History Center, was the final lecture of the series, which began on July 7.

The research is personal to DiCerbo, who is a descendant of the Chevalier’s oldest daughter, Marie Charlotte, who was also at Fort St. Joseph.

According to DiCerbo, there were many Chevaliers who made appearances at the fort, beginning with Jean Baptiste Chevalier, who arrived prior to 1720 after becoming a merchant in the region.

Jean Baptiste Chevalier and his wife, Marie Françoise Alavoine, had 16 children, 12 of whom lived to maturity and went on to intermarry other prominent families with strong ties to the fort.

DiCerbo detailed several members of the family that spent time at the fort, including Louis Chevalier. Born in 1720, Louis Chevalier reportedly arrived at Fort St. Joseph in 1748.

He was arguably the most well-known member of the family, mainly for his roles at St. Joseph. A merchant himself, Chevalier married Marie Magdeleine Réaume, who was a prominent merchant at the fort. According to documents, he always signed his name with a double “L” to distinguish himself from his brother, Charles.

“They were the epitome of Fort St. Joseph,” DiCerbo said.

The aftermath of the French and Indian War saw many French families leave Fort St. Joseph due to the onset of British rule, but Louis Chevalier’s family remained. Chevalier had a strong relationship with the local Potawatomi, so much so that Major Arent de Peyster made him the liaison between the Potawatomi and the British at St. Joseph in 1777.

The Chevalier family’s relationship with the fort ended in the summer of 1780, when British Lieutenant Gov. Patrick Sinclair had Louis Chevalier and the rest of the French families remaining at St. Joseph deported and removed them to Michilimackinac. Sinclair blamed them for the British’s defeat at St. Louis in 1779 due to leaking information throughout the Mississippi River Valley.

DiCerbo said Chevalier wrote many letters to Gov. Frederic Haldimand attempting to get permission to return to St. Joseph to retrieve his belongings, but he was never allowed to return. The removal backfired for the British. The Potawatomi were furious and refused to trade with the British traders who took their place.

Chevalier and Marie Magdaleine Réaume left Michilimackinac and relocated to Varennes, where Magdeleine died in 1784. Louis went to Montreal after, where he died in 1789.

When asked what kept the Chevaliers in Fort St. Joseph for so many years, DiCerbo said the fort’s location and the family’s connections were important factors.

“They were on the interior, and the family was very popular,” she said. “They entwined the family within their trade. If you look at a broad map of the family and all of the different networks and connections they make, it’s very expansive. It covers a huge region of the country’s interior.”

According to DiCerbo, the women of the Chevalier family held prominent positions and wielded political power at the fort. She used Marie Charlotte, the first born child of Jean Baptiste Chevalier and Marie Francoise Alavoine and mother of 10 children, as
an example.

“Marie Charlotte was the godmother to many children at Fort St. Joseph,” she said. “That establishes a political connection by connecting yourself to these other families through baptisms and witnesses at marriages. You provide another connection to others within the fur trade network. It may not seem like much, but there is a whole network that the women used amongst the people at Fort St. Joseph.”

DiCerbo noted during her presentation that several members of the greater Chevalier family had similar names, which often leads to confusion when researching. For example, Louis Chevalier and his brother, Louis Paschal, married Marie Magdeleine Réaume and Marie Magdeleine Larchevêque — mother and daughter with the same name — respectively.

“That’s just asking for confusion,” she said. “Trying to tease that situation apart is not always easy, especially with them being at the same location at the same time.”