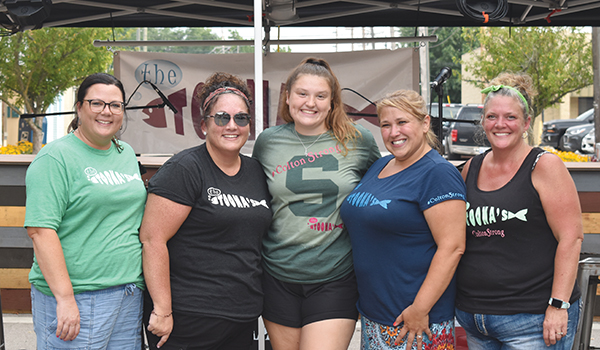 From 7 to 10 p.m. Wednesday, the NODE, at the corner of Second and Main streets, was host to a #Coltonstrong event, which aimed to raise funds to support treatment and transportation costs for Colton Hubbard, an area teen battling a rare condition known as atypical choroid plexus papilloma.

Providing live music for the event was local band The Toona’s, a group of teens who have been playing together since the sixth grade. In the band is Colton’s sister, Abbie Hubbard, 16.

Colton was first diagnosed with brain tumors at age 7 and had them removed. However, additional tumors were found when he was 11 years old, and he underwent six months of chemotherapy. In April of this year, doctors found three more growths on the now 14-year-old’s brain. Colton is currently in Minnesota with his parents receiving radiation treatment.

While her family is in Minnesota, Abbie decided to see if her bandmates would be able to help her host a fundraiser in her brother’s honor.

“I wanted to host this event to help my parents with some of the medical bills,” she said. “This was just a really nice gesture from all the other band members that they wanted to do this for [Colton].”

“They’ve been together since sixth grade, so when something happens to one of them, it happens to them all,” said Katie VanSandt, who helped The Toona’s organize the event.

Though fundraising totals were still being counted as of Thursday afternoon, VanSandt estimates that nearly 200 people turned out to support Colton and the Hubbard family Wednesday evening.

In addition to receiving support from those in attendance, local businesses also gave back to the Hubbard family Wednesday. Businesses such as Pizza Transit and the Brass Eye donated a portion of sales to Colton’s care.

“It’s overwhelming,” VanSandt said. “I think the world is pretty crazy right now, and I think this gives you a chance to have some faith in humanity.”

Abbie also said she was grateful for the community supporting her family — and she knows Colton is grateful, too.

“For my family and I, we are just super, super grateful for everybody in the community coming together to support my brother,” she said. “We are just so happy.”

Though Colton could not attend Wednesday’s event in person, Abbie said he is scheduled to complete his treatment in August and is currently doing well.

“He has been really strong throughout this whole thing, and he has had a really good attitude,” Abbie said. “I think he is just really excited to be back here and see everybody.”