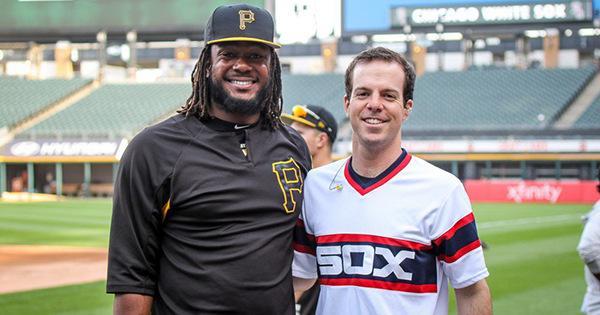 NOTRE DAME, Ind. — When the University of Notre Dame hosts Toledo in its 2021 football home opener Sept. 11, the Fighting Irish will have a new voice coming through the public address system after 39 years.

Chris Ackels was announced as the new stadium public address announcer Tuesday afternoon. Ackels is replacing Mike Collins, who was the voice of Notre Dame football at the Stadium for more than 230 games.

Ackels currently lives in Chicago where he has worked with the White Sox, Bulls and Blackhawks. He has also been an announcer for Northwestern, DePaul and Saint Louis University. Ackels is not new to college football, having been the PA announcer for conference championships and tournaments for the Big Ten, Big East and Atlantic 10.

Being an announcer has been a lifelong dream for Ackels.

“Ever since I was a kid, I’ve wanted to be a sports announcer,” he said. “I used to lay in bed at night with a radio underneath my pillow listening to baseball games and always wanted to do that. So, as I then started high school — I went to a Catholic high school in my hometown of Dallas, Texas, Jesuit College Prep — I walked into the athletic director and said, ‘Can I announce games?’ I started doing basketball games and soccer games and baseball games, and then I got to college and did the same thing. I ended up getting to announce a few games in college, and then got to grad school and was fortunate enough to work with the athletic department as a graduate worker at DePaul University.”

Ackels has been an announcer for the Chicago White Sox for the past five years. It was there that someone said he should apply for the Notre Dame job.

“This was way back months ago,” he said. “I made those initial contacts about potentially applying and went through the process. Notre Dame every step of the way was organized and clear, and I know for a fact there were other really amazing people who were a part of this process. By the grace of God, this is how it ended up. It’s been truly a lifelong dream of mine, though, in this specific context of this job. There have been some really great people who have encouraged me to do it, pushed me to do it, and then have given me the chance to do it. So, I just have a lot of people to say thank you to.”