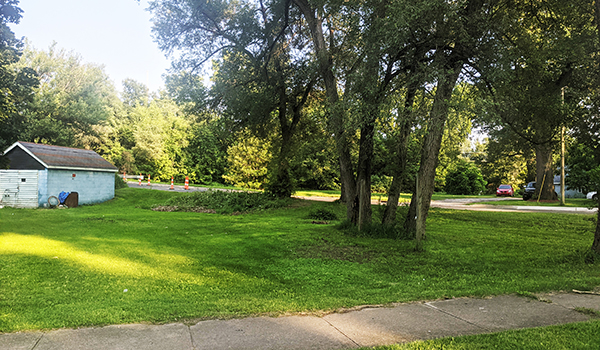 DOWAGIAC — A vacant plot of land will soon become part of the city of Dowagiac’s redevelopment plan.

The Dowagiac City Council unanimously approved a resolution to accept the donation of property located at 527 S. Front St. for the purpose of redevelopment.

The property at 527 S. Front St. is currently vacant, and the property owner approached the city about considering accepting this property as a gift, according to City Manager Kevin Anderson.

“The long-term hope is for redevelopment in this area,” Anderson said. “Part of that redevelopment is to acquire pieces of property one by one as they become available.”

“It fits in with the long-term pieces,” Anderson said. “There’s not an immediate plan for it, but there are opportunities for long-term redevelopment of residential properties in that area, and this would fall into that category.”

In other business, the council also passed a resolution to authorize the sale of 505 Spruce St. —  the city’s Michigan State Housing Development Authority Modular Home.

The 1100 square foot property was priced at $199,999 and features three bedrooms, one bath, central air, laundry space, crawl space and a two-car garage complete with a garage door opener. The bedrooms feature walk-in closets and the kitchen houses appliances including a refrigerator, gas range, over-the-range microwave and dishwasher.

The home was constructed with grant funds provided by a MSHDA grant. It is a low-income modular home, meaning eligible buyers must be at or below 120 percent of the average median income of the area, which equates to $75,240 for a family of four or $99,360 for a family of eight.

According to Anderson, legitimate interest was expressed by the buyer Friday afternoon, but further action could not be taken until the city received approval from MSHDA. The interested party met with city officials Monday afternoon and updated their offer in time for acceptance.

Anderson said the closing process could take up to 45 days to complete.

“We were able to work through the concerns,” Anderson said. “We were able to make sure that the income qualifications, everything falls into place and that the state has given their approvals on it.”

The MSHDA modular home was built on one of five city-owned lots on Parsonage and Spruce streets. The home is flanked by a private modular home on one side and a lot where the city and modular home developer Accent Homes of Dowagiac LLC plan to build a third modular home by the end of the year.

“We’re excited to see that there is another house under development that has been ordered and is due in a couple of months,” Anderson said. “We’re going to see three mod houses on Spruce Street by the end of the year.”

In addition, the council also passed resolutions to set public hearings regarding blight at 310 E. Telegraph St. and 404 Thickstun St. in Dowagiac.

The public hearings will take place during the next council meeting on Monday, Aug. 23. After the public hearing, the council will then consider authorizing the removal of the nuisance and assessing the property for costs.

The E. Telegraph property received significant damage from a March house fire that claimed the lives of two people and has sat vacant ever since. The Thickstun property experienced a fire in June and is also vacant.