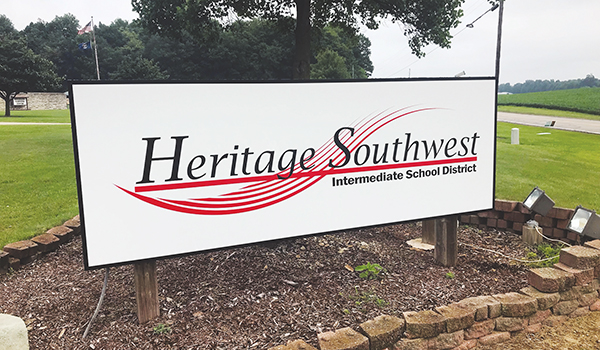 CASSOPOLIS — A local school district finally has a new face to match its new name.

“We are pleased to see the staff has taken steps to make the new name visible to the community,” said Board of Education President Kevin Anderson. “We are also pleased this was done in a timely manner. I know people had hoped this would happen overnight, but procuring signs and paperwork takes time.”

The ISD officially changed its name to Heritage Southwest ISD in January after months of discussion stemming from controversy surrounding the former name. The district was previously named for Lewis Cass, a former territorial governor of Michigan. Cass ran for president in 1848 and served as secretary of war under then-President Andrew Jackson.

The board of education began discussions about a name change in summer 2020, after Gov. Gretchen Whitmer removed Lewis Cass’ name from a state office building due to evidence of him being a slave owner, supporting states’ right to choose whether or not to outlaw slavery and implementing policies under President Jackson that relocated and harmed Native Americans.

The ISD board formed a specialized committee to review a name change in December 2020. The committee recommended the name Heritage Southwest, which members said was more inclusive to all Cass County residents. The name change was approved by a unanimous vote by the board of education.

Now, months after the vote and more than a year after discussions began, Anderson said he is happy to see the new district signs placed.

“What we are seeing now is a continuation of the committee’s work,” he said. “We want to be sure the school district’s name reflects who we are and is respectful and inclusive to all. We are happy that we can take steps toward that.”

Though District Superintendent Andy Hubbard was hired after the name change was approved, he oversaw the placement of the new signs, bus lettering and awnings, in addition to the website’s upgrade. Currently, the website still features some photos with Lewis Cass ISD on the signs and awnings, but Hubbard said staff would be working to replace those with new photos soon.

“I’m sure that for years we will continue to come across things with the old name on it, and we will address those when we come across them,” he said. “It’s quite the undertaking. It will be a long process.”

No matter what the district’s name is, Hubbard said the ISD’s mission would remain the same.

“We will continue to support our four local districts,” Hubbard said. “That’s what we are here for, to provide support and work with and try to improve the education of all students in Cass County.”

HOWARD TOWNSHIP — A hit-and-run suspect has been apprehended after an incident near Barron Lake Thursday, according to the Cass... read more