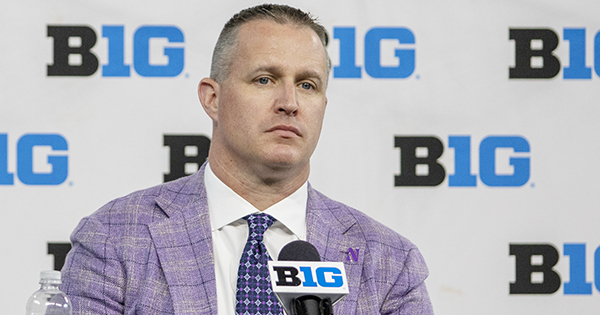 INDIANAPOLIS — There were a couple of common themes during the two-day Big Ten Media Days at Lucas Oil Stadium.

One of them, of course, was football and what each team’s fans can hopefully expect during the 2021 season.

Instead, each coach addressed the Name, Image and Likeness issue that is sweeping across the college landscape. What that means is that players can now make money, while still playing college sports, off their name, their image and their likeness.

All of the coaches said it is something that they will have to deal with whether they like it or not. Some claimed they were doing a great job embracing the latest role. Others are taking a wait-and-see attitude.

“I think NIL for all student-athletes is outstanding,” said Northwestern Coach Pat Fitzgerald. “I’m not going to lie to you, I’m a little jealous. I mean, think about the mid-90s the dough I would have made. I mean, come on? If I was here in Indy, I probably could get a free cup of coffee. But there’s a lot of opportunities for growth and improvement in college football and the NCAA, and I think NIL is the first step. I love listening to all the coaches in the Southeastern Conference and the guys before me, we’ve got the best opportunity of NIL in Evanston, in Chicago.”

Fitzgerald added it is a learning process for everyone involved.

“We’re all trying to figure this thing out, so we need to get off thinking we have all got the best and work hard to educate our young men, educate their families, and then eventually put things in place to educate from the NCAA and the Big Ten level perspective student-athletes and their families,” he said. “This is a great opportunity if used the right way, but it’s a job. And you have to have the right resources around the student-athletes to support them and support their family. So, I think we’re going to all learn a lot through these next 12 to 24 months, but it’s a positive first step. I’m just a little jealous.”

While I have believed for a long time that players should be getting some compensation for making their universities millions of dollars, I am a little annoyed that coaches have to worry about NIL and are having to spend time dealing with it. Their job is to coach football, not be a financial advisor for their players.

One thing I agreed with was that a lot of the coaches believe that it is going to be a big team this year, but will eventually calm down. One coach even compared it to kids having a new toy at Christmas. We all know that kids love that shiny new toy on Christmas day, but after a few days or weeks of playing with it, the toy loses its shine and gets thrown in the corner or a toy box.

Whatever happens with NIL, I hope sports teams can put that aside when it comes time to start playing games, which by the way is just over a month from now. I want them focused on chasing championships and not a dollar. College football is an American institution. It is something that brings a lot of people together. We need it to stay the course and not be taken down by greed.

Only time will tell. I will have my fingers crossed as I get geared up for the upcoming season. After two days of talking Big Ten football, I am ready to get the year started.