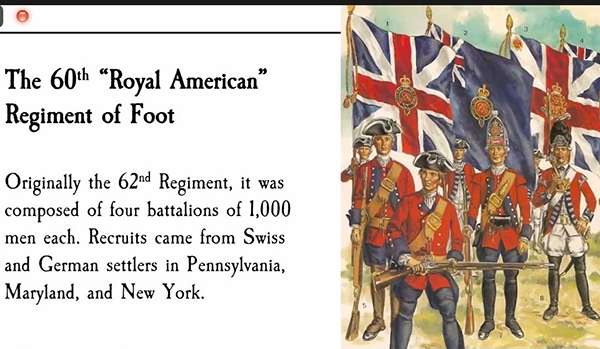 NILES – He may have lived at Fort St. Joseph more than 250 years ago, but the life of Ensign Francis Schlosser offers many timely lessons for people today. Schlosser, a British soldier, served as the last commander of Fort St. Joseph before it fell in the last half of the 18th Century.

As with all four of the 2021 lectures, Wednesday’s lecture was hosted virtually with three dozen people logging on to watch the program. The series is co-sponsored by the Niles District Library, the Niles History Center and the Fort St. Joseph Archaeological Project.

The final lecture in this year’s lecture series is set for Wednesday, July 28 at 7 p.m. A retrospective of the Chevalier family, their roles and their relationships will be presented by Loraine DiCerbo, the Habitant Heritage editor of the French-Canadian Heritage Society.

The lectures are being recorded and will be available to the public after the final lecture next week. This year’s archaeological field school at the fort site will conclude Aug. 7-8 with an open house where the public can see this year’s discoveries and step back in time to the 18th Century.

Myers’ presentation was in keeping with this year’s theme of “People of the Post”. Previous lectures gave an overview of 20 years of archaeology finds and the role of Jesuits at the fort. The July 28 lecture will focus on the history of one of the leading French families associated with the fort.

Myers said Schlosser’s tenure at Fort St. Joseph was fraught with missteps and mistakes. In addition, he got his position as the one and only British commander of Fort St. Joseph as a favor people were doing for his father who was a British officer. Captain John Joseph Schlosser was a respected officer and engineer and supervised Little Fort Niagara in 1760.

“In 1759, Captain Schlosser writes Colonel Henry Bouquet to basically ask ‘can you find a job for my kid?’” Myers said. “He is asking the colonel for an officer’s commission and on Aug. 29, 1759 was commissioned as an ensign which is the equivalent of a second lieutenant today.”

The younger Schlosser arrived at Fort St. Joseph with a sergeant and nine enlisted men on Nov. 9, 1761. “He faced numerous difficulties, some inherent and some self imposed,” he said. “While he was a young guy in over his head, you still got to feel for the guy 260 years later.”

Myers said some of the challenges Schlosser faced would have been hard to solve for even a master diplomat. One of the greatest challenges was how to deal with Native Americans who had strong relationships with the French who had been defeated in 1759 by the British in the French and Indian War.

“Native Americans said ‘no one asked us, we didn’t surrender, nobody asked us to surrender,’” he said. “They had been left out of everything.”

Myers noted that British officials like Schlosser were being told to cut costs as expenses mounted for the global British empire. At the same time Native Americans expected to continue to receive the “presents” they had gotten from the French like trade goods, knives and coins.

He called it “nonsense” that Native Americans were cheated by the Europeans.

“They had been trading for centuries and knew a bargain and the quality of goods,” he said. “The natives played the French and the English off against each other to gain advantage.”

On top of what Myers called the “real faux pas” of cutting off the presents, Schlosser also was often drunk and otherwise misbehaving. When his actions were reported to his father and other officials, he vowed to mend his ways and he was left in command of the fort.

The end of Schlosser’s tenure at the fort and the end of the British occupation of the fort came in 1763 with Pontiac’s War which was a Native American uprising throughout the Great Lakes. They attacked Fort St. Joseph on May 25, 1763, killing 10 soldiers and taking Schlosser captive. Schlosser and two other soldiers were exchanged for two Native captives.

Myers said Schlosser wasn’t held accountable for his mismanagement of the fort and was given a command in central New York state. He ended up being killed there by a Native American slave in 1768. He was buried in Montreal in what is now an unknown grave.

In addition to presenting details of Schlosser’s life, Myers also spoke of what British items could potentially still be buried under the fort site. Those items might include 60th Royal Regiment buttons, materials marked with the king’s broad arrow symbol and British “Brown Bess” musket parts and associated items like musket balls, ramrod thimbles and trigger guards.