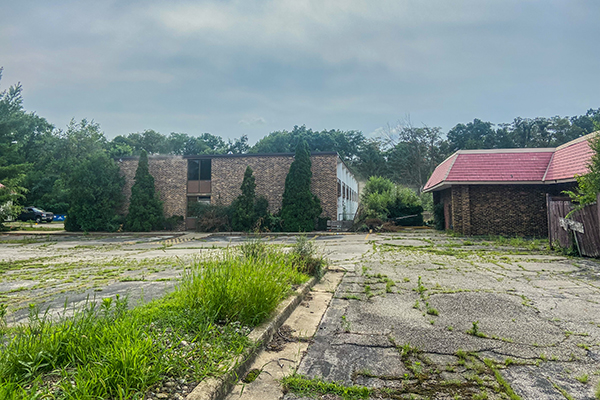 The department received a call at 4:48 p.m. that there was a fire on the second floor at the former Niles Inn and Conference Centre, 930 S. 11th St., in Niles. Upon arrival they found active flames. Mayor Nick Shelton reported on his Facebook feed around 5:30 p.m. that the fire had been contained.

“One thing, it is concrete walls, floors and ceilings so it really keeps it in check to where we are not going to get a National Standard type fire where it’s blowing in one end and out the other,” Wise said, referencing the suspected arson at the former National Standard plant on June 2. “Not saying it’s not possible, but it makes it harder for the fire.”

Just three months ago, on April 21, firefighters fought a blaze on the same property, also in the back of the building.

“[The structure has a] common problem with homelessness, kids, riffraff getting in the building,” Wise said. “It was secured after the last fire, but it doesn’t matter — they tear [the secured, locked parts] off.”

Wise said firefighters were searching the building for occupants.

“We know there’s a possibility of homeless people and riffraff being in there, so our crews are going through and doing a search of the building,” he said, adding that the fire was “suspicious in nature, because it doesn’t have any electric or gas hooked up to the building.”

Firefighters found evidence of people in the building in the form of mattresses, clothing and food boxes.

“It’s just paper, cardboard stuff up there. We call it Class A type material,” Wise said. “Last time, they had a mattress going. There was a column of black smoke coming out of it. This one was a bit lighter colored brown smoke, not anything like the mattress burning.”
The fire captain said the fire had to have been the result of human activity.

“We know somebody set it. There’s no lightning. There’s no electricity,” he said. “We think we got all the rats around here to quit smoking. It’ll just go down as a suspicious fire.”

The inn has been officially vacant since it closed in September 2016, when owner George Jappaya opted to close the facility instead of making necessary maintenance improvements.

Though the property remains privately owned, Mayor Nick Shelton announced in November 2020 that the building was set to be demolished this year. No official date for demolition has been announced.

An update to this story can be found here. NILES — Fire departments from the City of Niles, Niles Township... read more