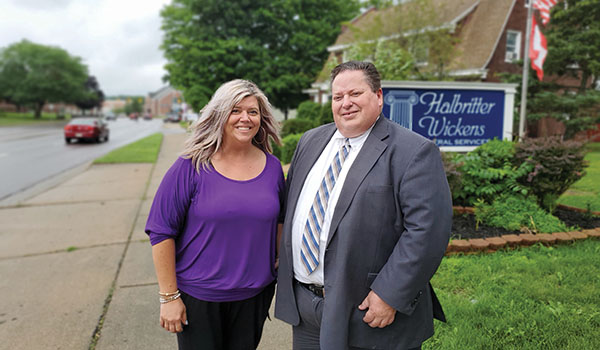 NILES — Owner of Halbritter-Wickens Funeral Services Steve Wickens is used to seeing his Niles business filled with flowers and mourners.

Tuesday, his business was host to something more unusual for him, as lights, cameras and actors took over his E. Main Street building.

“This has been interesting,” Wickens said with a laugh, as a studio light shined above his head. “We’ve never had something like this production here before.”

This week, South Bend-based writer, producer and director Danielle Minnes Cook filmed her upcoming movie, “Hard Road to Happy,” inside Halbritter-Wickens Funeral Services, 615 E. Main St., Niles. One of several locations to be featured in the film, the funeral home will be host to production crews for a total of seven days.

“Things are going wonderfully,” Cook said. “The cast and the crew have blown my mind, and we are really happy to be here.”

Cook is the founder and president of Minnes Tree Media, which is producing the film. “Hard Road to Happy” is Cook’s third film, the first of which was “The Bridge.” That film won both the audience choice award and the local gem award at the River Bend Film Festival in South Bend.

“Hard Road to Happy” follows a man, Levi, struggling with depression who meets a woman, Charlotte, who, despite a multiple sclerosis diagnosis, is “chronically happy.” Levi then decides to discover what leads to Charlotte’s happiness.

“[Suicide prevention] is not all it is about, but it is an important theme. I feel most everyone knows someone [suicide] has affected, or it has almost been themselves,” Cook said. “There is a powerful message here. I think this could save lives, which is why we are doing this.”

Cook began writing “Hard Road to Happy” in 2014. The death of her husband that same year put the project hold, as Cook found the subject matter and setting too painful. After several years, Cook said she felt called to revisit the film.

“There are no unhappy endings with God,” she said. “It was time.”

Cook became friends with Wickens throughout the research process for her script, often reaching out to ask questions about the funeral process. When the time came to film, Wickens was one of Cook’s first calls, as she knew she wanted to film in his funeral home.

Wickens said he was happy to be involved in the production for “Hard Road to Happy.”

“Even before I saw the script, I believed in her,” Wickens said, pointing to Cook. “We are glad to help, and I’m excited to see the finished product.”

After so many years, Cook said she is excited to finally bring her script to life. She plans to spend a total of three weeks in production and have the film produced and ready for viewing in summer 2022. Her media company will then seek both national and international distribution.

Until then, Cook said she can hardly wait to share her creation with the world.

“Some movies are just entertainment, and then there are movies that really stick with you,” she said. “I think that’s what this movie is. I think this is something that will stick with you for years to come.”