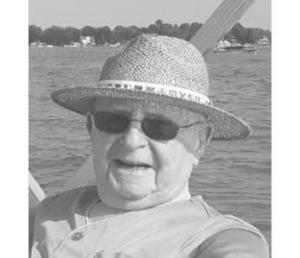 Ronald Wiggins Francis, age 85, of Cassopolis, died peacefully at his sister’s home in Florida on Thursday, March 11, 2021 in the comfort of his family’s presence.
His life began July 27, 1935 in Chicago, Illinois, one of three children born to Arthur and Marjorie Francis. He married Marsha Lusk on June 21, 1958 in Lake Zurich, Illinois.
Ron attended high school at Morgan Park Military Academy in Chicago and was a graduate & dedicated alumnus of the University of Illinois. After college he served honorably in the National Guard and began his career in marketing, first with Sears, then with Brach Candy Company, both in Chicago. From there, he took a position with Miles Laboratories in Elkhart, Indiana. It was during his tenure with Miles that he and his family spent three years living in Tokyo, Japan. During those years they enjoyed many travel experiences around the world. Upon returning to the states, Ron pursued his dream of owning a business and became the principal partner and President of Impressions, Inc., a commercial printing company in Elkhart, Indiana, in 1974, retiring in 2004.
Post retirement, Ron combined his extensive business experience and keen interest in politics, serving as a Cass County Commissioner for ten years. Ron was also active on the Cass County Economic Development Corporation Board, the Cass County District Library Board, and the South Bend Goodwill Board. Supporting and promoting the local community was an endeavor he enjoyed until the advancement of his Parkinson’s Disease.
Among Ron’s many passions, was his love for Diamond Lake, where his family visited as a child, initially becoming summer residents in 1949. He was an active member of Diamond Lake Yacht Club serving as Commodore, as well as many other positions on the board. He had a great fondness and aptitude for sailing and shared that skill with his children and grandchildren. Ron also treasured life-long friendships and enjoyed spending time socializing and playing cards. In his spare time, you could find him working on projects around the house and cheering on his beloved Chicago Bears.
Ron endured Parkinson’s in the same way he did all other challenges, with tremendous grace and fortitude, never complaining about the toll it was taking on his body and quality of life. His family wishes to express their deepest gratitude to the many caregivers who provided compassionate care to Ron, and respite for Marsha, during his last years. Without the loving nursing care provided by Ron and Marsha’s daughter in law, Janet and granddaughter, Brittany, it wouldn’t have been possible for Ron to spend his last months in the comfort of his home surrounded by beloved family. Very special mention also goes to Renee Ottman, Karen Carroll, Chrystal Teeter, Jennifer Wilds, and his hospice nurse Dana for their companionship and dedication to Ron and his quality of life.
Ronald will be dearly missed by family and friends. He is survived by his wife of almost sixty-three years, Marsha (Lusk) Francis of Cassopolis; daughter, Shari Soncrant of Englewood, Florida; daughter-in-law, Janet Francis of Cassopolis; five grandchildren, Hayley (Blake) Oliver of Toledo, Ohio, Austin Francis, Brittany Francis, Gavin (Paige) Francis, Lane Francis, all of Cassopolis; two great grandchildren, Nixon Oliver, Deacon Oliver; sister, Marilyn Stone of Chicago; several nieces and nephews; and a host of others who called him grandpa.
He was preceded in death by his parents; son, Reid Francis; and brother, William Francis.
Please join the family to share memories and celebrate Ron’s life for a casual Open House Gathering at the Francis home on Saturday, July 24, 2021 from 5:00 p.m. to 8:00 p.m.
Arrangements have been entrusted to Connelly Chapel Wagner Family Funerals, Cassopolis. Please share a memory or a message online: wagnercares.com.

Jacob Burge, 21, of Niles, passed away July 12, 2021, at Memorial Hospital after complications from an accident. Arrangements are... read more