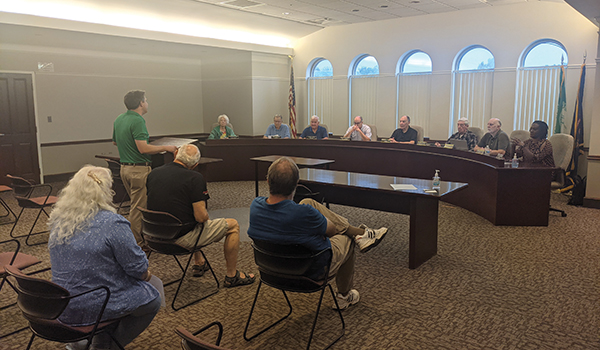 DOWAGIAC — The City of Dowagiac has moved one step closer toward the realization of an outdoors project that has long been in the works.

The Dowagiac City Council unanimously approved the extension of the Elks Trail grant deadline to Nov. 30 during its meeting Monday at City Hall.

The extension is the latest in a series of moves the city and the Elks Club have been working towards in order to reach an agreement for the easement to build Elk’s Trail.

In December 2018, the city was awarded $56,000 by the Michigan Natural Resources Trust Fund to acquire the easement along the south side of Dowagiac Creek — between Cass Avenue and Riverside Drive  — and build a trail for access to an inaccessible stretch of the creek and to link eight miles of existing trails.

For more than 40 years, the Michigan Natural Resources Trust Fund has distributed more than $1 billion in grants going to park, trail and playground projects throughout the state.

According to City Manager Kevin Anderson, negotiations had been active prior to the onset of the COVID-19 pandemic, which caused the negotiations to come to a halt.

“This gives us an opportunity to extend that deadline and continue negotiations,” Anderson said.

The original grant deadline was set for May 31, and the city requested an extension of the acquisition grant. The Department of Natural Resources verbally granted the extension to give the city and the Elks time to work through the final offer, but the official extension paperwork only recently arrived.

The city has since renewed negotiations with the Elks to purchase the easement for the price of $4,182 as well as address several additional concerns of both the Elks and the city.

In other business, the city granted Southwestern Michigan College permission to partner with the Greater Dowagiac Chamber of Commerce and the Dowagiac Police Department to facilitate Steve’s Run 2021, which will take place at 9:30 a.m. Oct. 9 in front of City Hall and take participants on a course that winds throughout the Dowagiac community.

Registration will be $1 for the Family Fun Run, $20 for the 5K Run or Walk and $25 for the 10K. Visit runsignup.com/StevesRun for online registration or to donate.

The 2020 race was hosted virtually July 25 through Aug. 1 during the pandemic. Historically, the race began and ended in downtown Dowagiac up through 2014, then moved to the SMC campus in 2015 before coming back to downtown Dowagiac this year.

According to SMC President Joe Odenwald, the decision to host the event in October would allow the college to pair the event with the Under The Harvest Moon Festival, which both the college and chamber of commerce hope will draw more runners to the race and more patrons to the festival.

“We’ll have full athletics next fall,” Odenwald said. “It’s all the more reason to be more visible in town and the community.”

BUCHANAN – The Buchanan City Commission’s first in-person meeting in more than a year featured a discussion on everything from... read more