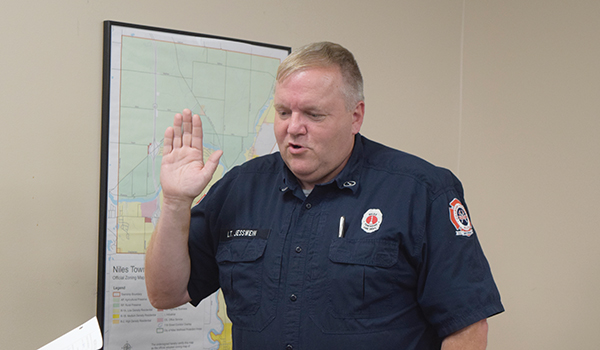 Tim Jesswein has been serving as the department’s interim, and then acting, chief since January. On Tuesday evening after the Niles Charter Township Board of Trustees meeting, he was officially sworn in to the position as the department’s fire chief.

“I appreciate all of your support,” Jesswein said. “I look forward to moving forward altogether.”

During the meeting, the board members voted unanimously to finalize Jesswein’s appointment and amended part of the paperwork. Treasurer Jim Ringler made a motion to amend the memorandum of understanding to allow Jesswein to receive his one-time salary increase of $2,000 Jan. 1, instead of 12- months after the official hire date.

“Part of this process is that once we’ve hired a fireman to be chief, then we have to go through the whole process of [finding] someone to replace him,” Ringler said. “That has actually taken every bit of six months to do that. I want to thank the [firefighters’] union for allowing this to take place like it has, in regards to hiring. [Jesswein] has been acting chief all this time, and it’s because we needed to go through the hiring process and train the guy.”

Ringler acknowledged the process has “eaten away six months” Jesswein could have been serving as a fully-onboarded chief.

Jesswein has more than 30 years of experience in the fire service. According to his application for the Niles Charter Township Fire Department fire chief position, Jesswein has been employed by Buchanan Township since 1987. He most recently has served as fire chief.

In August 2020, he was honored by the Buchanan Township Fire Department for his 33 years of service.

During the Tuesday evening township meeting, Jesswein said he had worked with the Niles Charter Township Fire Department for 17 years.

Later in the meeting, a Niles Township resident, Judi Libera, spoke during public comment about the traffic at Bell Road and S. 13th Street.

“The traffic is sometimes going 50 miles per hour down that road,” Libera said.

“The sheriff’s department I have been working together, and they feel that they should take South 13th Street on the south and Bell Road down to 35 miles per hour, to slow down the traffic into Bell Road. There’s potholes galore,” Libera said.

Ringler asked Libera what the other departments she had spoken to recommended to do.

“I’m getting all sorts of information, and they said I needed to go to a [township] meeting,” Libra said.

Township Clerk Terry Eull said that he had worked with residents at intersections on Bertrand and Ontario roads to help them get four-way stops installed.

“After a number of tries, we finally got them. We had to have the [Berrien County] road commission do a study. It’s a count. It’s traffic that dictates stop signs,” Eull said. “We’re not going to stop anyone putting stop signs up. It’s the Berrien County Road Commission, not the Niles Township Road Commission.”

SOUTHWEST MICHIGAN — For many, the Fourth of July weekend brought family gatherings, fireworks and general merriment. However, to many... read more