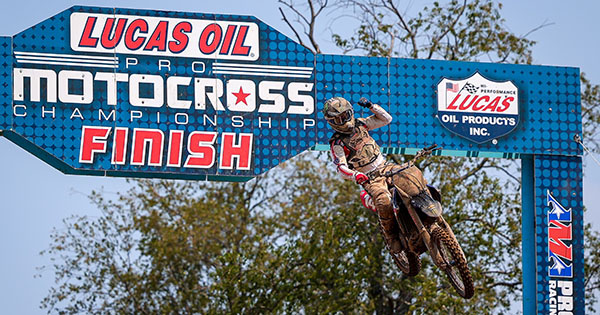 Dylan Ferrandis celebrates a win in moto No. 1 and finished his day going (1-2) capturing the overall victory at the RedBud National to extending his points lead in the 450cc class Saturday. (Leader photo/JEFFREY DOUGLAS).

BUCHANAN — Larry Davis could not contain his excitement.

Davis, a Coloma native and longtime motocross rider, was enjoying the sights and sounds of the 48th annual RedBud National Saturday at RedBud MX in Buchanan.

“It was our first experience of freedom and normality,” he said. “Everybody was just looking at each other like ‘is this okay?‘ Nothing like this has happened in our lifetimes t and it was just such a beautiful thing to get back together and feel normal again.”

The annual event is the fourth in a 12-event Lucas Oil Pro Motocross Series Championship, where motocross’ best professionals compete at 12 of the nation’s most prestigious courses,

“Having fans back at Redbud is obviously huge,” said Casey Huntley, public relations manager of Lucas Oil AMA Pro Motocross Championship. “It’s probably the biggest event of the season and it’s such an annual tradition with it being the Fourth of July weekend. The fans come out in packs for this one. Everyone has a good time, it’s patriotic and there’s a lot of energy.”

The feeling of excitement was echoed by the event’s dozens of professional riders, who had to participate in a fan-less Redbud National last year due to COVID.

“Seeing fans back out here was great,” said Lucas Oil AMA Pro Motocross Championship rider Chase Sexton. “It’s always a blast at RedBud. I’ve been coming here since I was four years old. I didn’t have the best day today but to come out here and see these fans, it’s been awesome. I’m looking forward to Southwick but it’s been great seeing these fans back.”

“They thrive off of the fans’ energy,” Huntley said. “It’s kind of a win-win for perhaps the fans themselves, the event and also the riders.”

As for the races, R.J. Hampshire and Dylan Ferrandis separated themselves from the pack.

In the 250 class, Hampshire earned two second-place finishes to win the overall title. Australia’s Jett Lawrence placed first in the first 250 class race and Justin Cooper in the second race.

Hampshire’s performance moved him up to fourth place with 111 points.

The 450 class saw Dylan Ferrandis, of France, take home the overall title with first and second-place finishes. Eli Tomac finished second overall on the day with a fourth and first-place finish. Saturday’s races propelled Ferrandis to overtake Germany’s Ken Roczen in the championship standings with 133 points. Roczen trails close behind with 130 points and Aaron Plessinger is currently third with 103 points.

As the riders raced across the dirt to the roars of fans, Davis could not help but smile.

“Just being able to see each other again, this is the epitome of it, you know? We hope something like (COVID) doesn’t happen again. I just have this tremendous feeling of gratitude that we’re able to be like this again. I hope everyone takes time to be grateful for this moment.”