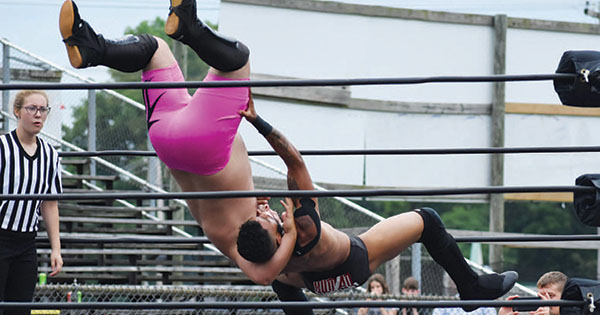 Buchanan’s Isaiah Moore will put his championship belt on the line at Slamstravaganza 2 at Thomas Stadium July 10. (Leader file photo)

HCW returns to Thomas for Slamstravaganza 2

NILES — Professional wrestling will return to Thomas Stadium July 10, when HCW hosts its Slamstravaganza 2 to help raise money for continued renovations to the iconic facility.

Wrestling is scheduled to begin at 7:05 p.m. with a full schedule of matches, including a pair of championship bouts and the debut of some new talent to HCW.

The HCW National Championship belt will be on the line when Buchanan’s Isaiah Moore takes on Eric Dillinger. The other title bout features Tony Thunder versus Chris Owens for the HCW Championship.

Also featured will be the HCW debut of Kongo Kong, who spent some time with Impact Wrestling.

Thomas Stadium has a long history of hosting events other than baseball, including wrestling. HCW Insurgence took place in August 2020. The stadium was originally built in 1946 in hopes of attracting a professional softball league. When softball never really caught on, the facility switched over to youth baseball.

The facility is currently in need of many repairs. Proceeds from ticket sales for Slamstravaganza 2 will go toward the restoration project that is under way, according to John Rosseto, president of HCW.

Rosseto said that this year’s show is bigger and better than last year’s.

“We have a new performer coming in,” he said. “His name is Kongo Kong. He actually is from Fort Wayne, Indiana. He was on the national scene for quite some time with Impact Wrestling. We are really excited to be bringing him in as part of our company, and he will be making his debut with us at Slamstravaganza 2.”

Rosseto added that it is all about helping raise money for the facility.

“The whole point is to drive in more fans and get more recognition for the stadium,” Rosseto said. “To get people to see the facility. They are actually having two championship games [youth baseball] around the 10th. The stadium is starting to get back some traction as far as playing baseball and a place to host championships. They still need some help, and really, this is the purpose of the entire thing.”

Rosseto promises plenty of excitement for the fans with a few surprises.

“Our athletes are very fan interactive,” he said. “We are planning really big things. We have some nice little surprises that will be happening during entrances. We have live music, new performers. Isaiah Moore is highlighted as one of our double main events.”

CASSOPOLIS — For the first time in more than a year, the public was welcomed into the Cass County Board... read more