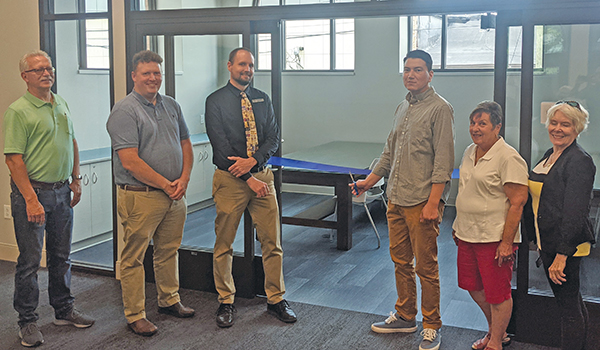 DOWAGIAC — Local students looking for a space to work on school or crafting projects need look no further than the Dowagiac District Library.

On Wednesday afternoon, the library hosted a dedication ceremony for The Pokagon Room, a multipurpose room in the teen area of the library dedicated to The Pokagon Fund and The Pokagon Band of Potawatomi Indians.

Pokagon Fund Executive Director Dan Petersen, Pokagon Band Director of Culture and Language Marcus Winchester and library officials were on hand for the dedication ceremony, which included the unveiling of a special plaque thanking the Pokagon Band and The Pokagon Fund for their continued support of the library.

Designed to be a programming and crafting area for teens and older children, The Pokagon Room features both hi-tech options such as data and Microsoft PowerPoint stations throughout as well as low-tech options such as large working tables, a sink area, cabinet space and durable floor tiles.

“We wanted to have a place for older kids to take their projects and work on them,” said DDL Director Matthew Weston. “The name ‘The Pokagon Room’ makes a lot of sense because we view this as a long-term space. Whether you go hi-tech or low-tech with projects — whatever you end up doing with the space — that could change over time, but that’s okay. The name will always be the same.”

Weston noted the library’s history of working with the Pokagon Band on various projects, including One City One Book programs and history/genealogy programs.

“There are lots of things we could continue here and expand on,” he said. “I think this room signifies the connection the library has with the Pokagon Band.”

The Pokagon Fund — facilitated by the Pokagon Band of Potawatomi Indians — provides strategic grant support to initiatives that help reduce the burden of poverty, strengthen local schools and student achievement, enhance the success of residents and provide vital support to rural communities.

“I want to congratulate the library and the community for the wonderful expansion and renovation project,” Pedersen said. “It looks phenomenal and it’s such an upgrade.”

It has been an exciting time for Weston and the library staff, having hosted the grand opening ribbon-cutting ceremony for the renovated library on May 15 and seeing hundreds of patrons check out the new facility.

Weston said that guests have been using the new study rooms located in the teen area. Study rooms can be reserved at the front desk for up to three hours. He also added that people walking near the library on Commercial Street have been utilizing the library’s boosted Wi-Fi signal.

The library has several programming activities planned for the summer, including its Summer Reading Program and Traveling Zoo Meet and Greet — a collaboration with the Dowagiac Conservation Club.

“Things have been picking up,” Weston said. “Most mornings, we’ve been getting families with kids coming in and people using computers. Some people come in and out. We have been getting teens using the seating more. We see a few waves of people per day. It’s been great to see, and we’re hoping that the trend continues.”

DOWAGIAC — Kelly Millin is ready for her next adventure. After seven years as the principal of Dowagiac Union High... read more