Stratton retires after 17 years at Brandywine 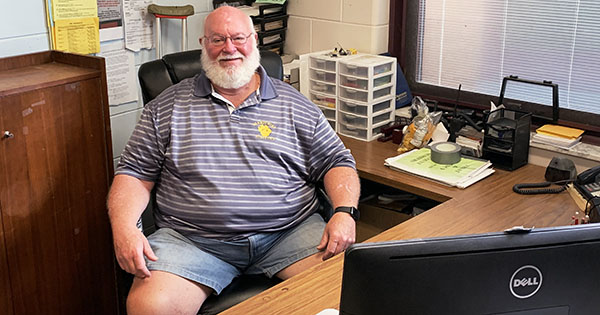 NILES — Wednesday was officially the final day that Vance Stratton was the athletic director at Brandywine High School.

Coming to Brandywine from Cassopolis, where he held the same position, Stratton has overseen a transition of the facilities and the success of the Bobcats’ athletic department.

Among the highlights are a new football field and track with new lights and press box, a new soccer field, an auxiliary gym and new tennis courts at the high school.

Stratton has also offered support as the coaches he has hired and worked with have created successful programs for both boys and girls teams that are recognized throughout the state.

“I have been for 45 years, either coaching two sports a year, or one sport and AD, or AD for grades seven through 12,” Stratton answered when asked if he was ready for retirement. “Always working in the summer, either working in a weight room, running conditioning for sports or being an athletic director, who is trying to keep from falling behind during that time before the fall starts. So, I never really had any time off. It has always thrown a tremendous amount of responsibility on my wife [Marcia]. I kind of owe her big time for all those years.”

Stratton said he is going to spend a lot of time making that up to his wife. He has no specific plans, but will be doing a lot of the things she wants to do.

“People ask me all the time, are you going to travel?” he said. “I tell them no — not unless she wants to. But I have a cleaning-out-a-garage project that has been sitting for 16 years. I never seemed to find the time to do it, but I will now. I plan on taking full advantage of a golf membership that my coaches and booster club were so kind to make sure I got. Marcia and I are going to go out and hit those goofy little white balls around and chase them for exercise. Just kick around stuff for a while. No big plans. Just kind of enjoy the house.”

Stratton will also be helping get his daughter, Katie, prepared to leave in the fall for her freshman year in college.

“There is going to be plenty to do,” he said.

After watching either Cassopolis or Brandywine sporting events for more than two decades, Stratton is looking forward to going out to see some other teams play starting in the fall.

“Then, looking at the schedules, as they come out for next year and they go in the paper, I probably will pick a game every week to go and watch teams play football,” Stratton said. “There are a lot of good football teams in the area, and we now have that option of going and watching other teams play. And, if it rains or something, I don’t have to go. That is kind of enjoyable to think about too.”

Among the things that Stratton will miss is “working with the Brandywine Athletic Boosters because they were phenomenal,” he said. “Sandy [Neldon] and Kathleen [Shelton] ran it. I never had to worry about any of it, which isn’t the case for a lot of ADs. They did a great job.”

Also, he will miss the coaching staff, both current and former, with who he feels he always had a good working relationship with.

“I can’t think of a coach that I had that I was happy to see go,” he said. “In this job, you have to do things every once in a while, that you don’t want to do. But that is the nature of the job. It doesn’t necessarily have anything to do with how you personally feel about the person. So, I am not going to miss that part when you have to make those decisions.

“I have always liked everybody that was one the staff here on staff in the past that are not here now. I truly believe that we have coaches that care about their program and their kids. They work hard. We are pretty competitive across the board, which is what you strive to be.”

Brandywine Baseball and Boys Tennis Coach David Sidenbender, who has been tabbed to replace Stratton as athletic director, has enjoyed working with him.

“Vance has always been a coach’s AD from day one,” he said. “He supports and helps all his coaches to be the best they can, whether it be with uniforms, supplies, scheduling, etc. Brandywine athletics has grown and prospered under [Stratton’s] watchful eye. I have always been grateful for his openness to do what he could to make our coaching jobs, including mine, easier and to help our student-athletes attain success. He will be missed but not forgotten and his experience can always be a resource I plan to keep using.”

“Vance Stratton is ‘the Godfather’ of athletics in southwest Michigan,” he said. “He has all the qualities that excellent AD possesses. Vance is a hard worker, fair, organized and easily approachable. Vance would do anything for his coaches and student-athletes while also holding everyone on his staff accountable. Mr. Stratton will be greatly missed at Brandywine.”

Brandywine wrestling Coach Rex Pomranka probably had the most in common with Stratton due to his wrestling and coaching background.

“It has been a wonderful run working with him,” he said. “Picking his brain and getting all his advice. I am going to miss him. He has helped all three programs that I work with getting to where they are now.”

This fall, Stratton will be attending Santa Claus school in between attending sporting events where he will become a registered “real beard” Santa.

“Being a redhead, I knew when I got older I was going to have white hair,” he said. “All the pictures I saw growing up were of Santa Claus with his white beard. I thought I am kind of big, and I can grow a beard and it looks right, it would be pretty cool. It makes a lot of little kids happy. I was just joking around with Marcia one time and said I was going to do that.”

Doing some research, Stratton came across an association of real-beard Santas.

“I talked to a couple of guys. They said if I really wanted to do it, go to this school, and you will make a lot of contacts,” he said. “A guy I coached with at Cass, his dad was a Santa Claus for years. He said it was really cool.”

This October, Stratton will be headed to Midland to go to the Charles W. Howard Santa Claus School, which has been in existence since 1937.

“So, during the month of November and December, if I can get some things to do, it would be cool because Marcia could be Mrs. Claus,” Stratton said. “It would be something we could actually be going together. I should be kind of fun.”