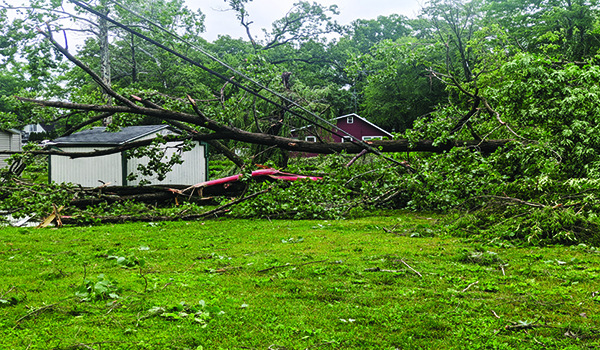 SOUTHWEST MICHIGAN – Severe weather can take out power in a small neighborhood or across large swaths of the region.

Last week, southwest Michigan experienced days of storms that damaged homes and left residents in the dark. As the power went out, electric and utility crews came in — a scene that may repeat itself as the summer goes on.

Residents waiting for electricity to be restored may see utility trucks and the hard-hat wearing crews coming to clear the debris and restore power. Oftentimes, those workers are a welcome sight. Getting to that point takes organization and orchestration from the back end, that can begin as soon as storms are predicted.

Derek Gordon, city of Niles assistant utilities manager, said he keeps an eye on weather reports and his staff works quickly to prepare for when a storm passes and an outage is left behind, no matter what time of the day it is.

“We have an on-call person, who if they’re called by police dispatch or myself, they’ll assess the situation and assembled a team,” Gordon said.

When a concerning weather system starts heading toward Niles, Gordon said the staff will check the trucks, ensure they are stocked with equipment and fill the fuel tanks.

“We really watch [conditions], and [the team] collectively does a great job of pre-planning. The trucks are ready to go,” Gordon said. “If a storm is going to hit at about six, they do a good job of preparation for that.”
Gordon said utilities and electric departments get lots of calls from customers, police dispatch and interact with people on the ground as they arrive to make assessments and repairs.

When outages are widespread, the utilities department sometimes does travel to help surrounding communities.

“We are in a mutual aid with surrounding municipalities, and we have Midwest Energy that helps us or we go to them,” Gordon said. “If it’s a really widespread, damaging storm, whoever can take care of their stuff can go help others with power restoration. I’ve been a part of that a couple of times. The linemen really love what they do.”

A release from Indiana Michigan Power, or I&M, on Monday, June 21, said more than 28,000 customers were without service due to damaging winds during storms in South Bend, Elkhart, and southwest Michigan. More than 450 “internal and external personnel” were working to restore power to the region that evening, including from AEP Ohio and from area contractors.

Schnee Garrett, communications consult from I&M in South Bend, said that the parent company of I&M, American Electric Power, has a full staff that keeps crews informed. They also pull in crews from out of the area, and go help others, when storms hit.

“[AEP] has a full staff of meteorologist to keep employees informed of inclement weather, which enables line workers, meter reader operations and other departments to begin work on logistics and storm preparations,” Garrett said. “I&M monitors weather conditions before, during and after any storm.”

Garrett said I&M is part of a mutual assistance program that can help other energy crews, in and outside of I&M’s territory. I&M locally requests help first from nearby regions in Fort Wayne, Muncie and Marion. These are often the crews mentioned initially, as coming to the area to assist I&M.

There are six other AEP companies I&M can call on if need be, including AEP Ohio, AEP Texas, Appalachian Power Company, Public Service Company of Oklahoma, Southwestern Power Company and Kentucky Power.

“We always have staff ready, and we have representatives answering phones at all times,” Pales said. “Additionally, our outage response teams are prepared to work anytime day or night. We also have closer relationships with additional contract crews and will enlist them as needed during major events like the ones we’ve recently had.”

Pales also said the company has a “very aggressive line clearance program” that works to keep trees and shrubs out of rights-of-way, power lines and infrastructure to reduce future outages.