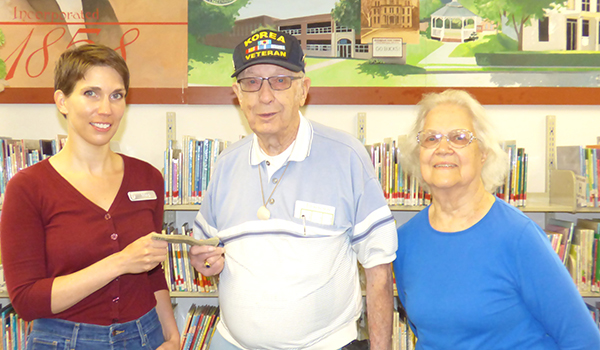 BUCHANAN – An era is coming to an end as organizers have announced they will stop hosting their annual Buchanan Area Rural Schools Reunion. The reunion had been hosted every August since 1987 until last year, when the pandemic kept members from meeting.

Current reunion chairman Don Holmes and secretary Joyce Ferris said the decision to end the reunions was a difficult one. Holmes attended Broceus School while Ferris attended Miller and Kansas Schools. They noted that only 11 or 12 rural school alumni attended the reunion in 2019, and at least five of them have died in the last year.

Holmes and Ferris were at the Buchanan District Library recently to donate the reunion committee’s remaining proceeds totaling $225 to Library Director Meg Paulette. The reunion committee has previously donated funds to the library’s building fund and other efforts. Paulette said the donated money will be used to pay for books and other programming.

The Buchanan library is already home to materials connected with the one room and rural schools in the area. Library Archivist Peter Lysy said the materials include those associated with the “Buchanan One Room School Houses” booklet published in 2012 as well as school records and photos and mentions in historical newspapers.

He noted that the library’s Local History Room has all the records and materials compiled for the 2012 booklet along with extensive records from the Mead School and smaller schools detailing student rosters and school programs and special events.

People can find more mentions of these early schools in historical newspaper records. Lysy said the library currently has copies of the Berrien County Record digitized through 1939, which can be found at buchananlibrary.org/local-history-room/historical-newspaper-collection.

“There was an emphasis on education and every township had a section dedicated for school purposes,” he said. “People in an area would get together to form a school near their homes. They truly were neighborhood schools for rural areas.”

“Rural schools would teach students primarily through the eighth grade,” he added. “Students would then go to the Buchanan for high school. Villages and towns would have union schools where the grades were separated. The first graded school in Buchanan was started in 1850 at Dewey and Moccasin Streets.”

While some of these one room and rural schools have been lost to history, a number have been repurposed to be everything from private homes to churches. The Indian Hills School on North Main Street was one of the latest rural schools to be built in the 1950s before it ended up being closed in the 1960s. It is now home to the Faith Victory Fellowship church.

Historians have estimated that there were more than 7,200 one room schools in Michigan. The development of schools evolved over the years from the small one room schools to slightly larger rural schools and then union or graded schools in villages, towns and cities. Larger school buildings including space for physical education became the norm in the early decades of the 1900s.

In Buchanan, the memories of those one room and rural schools will remain although the annual reunion will no longer be held. The history of the different schools, the friendships made, the classes held and the special programs observed will always be there through the stories passed down through families and the records available at the library.

The first rural school reunion was held in 1987 with Dorothy Clark Hamilton, a former teacher, organizing the gathering. In those early years, as many as 100 people or more attended the annual reunion held the first Saturday of August.

Reunion attendee Kay Craw memorialized the history and people’s memories with the publication of a booklet in 2012 for the reunion’s 25th anniversary. Craw did not attend a one room or rural school herself but got interested in the history after attending reunions with her husband, Mike, a Miller School alumnae.

“Being the curious cat that I am, I started checking with the Berrien Historical Society in Berrien Springs, the Intermediate School District and libraries in Berrien Springs, Buchanan and Niles looking for information,” she wrote in the introduction to the 2012 booklet. “I found that there were 21 schools within a five-mile radius of Buchanan.”

The result of her efforts was not only the 83-page spiral bound book that was published that year but also a much larger compilation of information and photos in two large notebooks that is housed in the Buchanan District Library’s local history room.

As Craw also notes in the book’s introduction, she started a campaign to collect as many records as she could. While the intermediate school district had kept records of attendance and grades, everything else such as class pictures, programs and school board minutes had been thrown out with only some of it rescued and saved.

“When all the schools were consolidated in the 1950s and 1960s, all the stuff came into the Buchanan schools and a lot gotten thrown away or taken home,” she said. “It upset me, and I decided to do what I could to gather up the information that was out there. It’s been a real journey and a very interesting journey, I’ve learned a lot.”

DOWAGIAC — It was a bachelor party that Mark Ullrich and Rob Rivera will not soon forget. Chicagoland natives Ullrich... read more