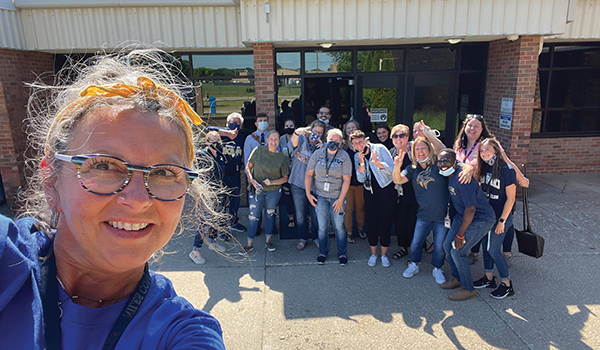 Despite a challenging year in classrooms, both virtual and in-person, many of the staff retirees were in the range of natural retirement age.

“I think COVID had some play in their decision, but they were certainly of that time that they could retire,” Weimer said.

A nationwide shortage of substitute teachers, bus drivers and educators continue to be a challenge for area schools.

“We are trying to get people hired as early as we can,” Weimer said.

Retirees were recognized at a meeting if they were able to attend. Combining retirees from this year and last year was a decision to honor both groups.

“Last year’s [retirees] didn’t get to speak. This year’s got to. It’s wonderful to hear their stories. They talked about how supportive [the school] is, and how it’s a family, how much they’ve learned,” Weimer said. “It’s always nice to hear them talk about their experience.”

With a number of staff members who have retired from Niles Community Schools this summer, Superintendent Dan Applegate said many retired with around 30 years as part of the school system.

“Three of them are leaving from one building, from Ballard [Elementary School]. A lot of veteran status is walking out the door,” Applegate said. “Those are all talented and great teachers. We appreciate their mentorship and everything they’ve done through the years.”

Applegate said the legacy the educators leave has been to pass down what they know to their students and other teachers around them.

“Many of the other teachers that we have there have learned from them, and benefitted from their models and techniques,” he said. “Several of them have been mentors in the new teacher induction program.”

He extended his congratulations to the educators and staff members who opted to retire.

“They deserve the opportunity to retire after all the things they’ve done. All the years they’ve been in the classroom – they’re developmental experts,” Applegate said. “They know better than anybody what to expect from a third grader in terms of behavior.”

“I had set a goal, and it all fell into place,” Schaller said, with a 25- to 30-year timeline to spend as an educator. “I didn’t want to be a burned-out teacher. I have goals of a second career, and I figured that I probably made it through the toughest year of my career.”

She hopes to travel more in retirement, but that is not all.
“I have dreams of entrepreneurship, and I wouldn’t be opposed to becoming a grandma,” she said.

“It’s sad to see talented individuals go, but it is wonderful that we were able to keep them with us as long as we had, and the impact they had,” Applegate said.

Retirees throughout Niles School District for the 2020-2021 school year

SOUTHWEST MICHIGAN — As of Thursday, Berrien County reported 13,929 COVID-19 cases and 270 deaths, according to the Michigan Department... read more