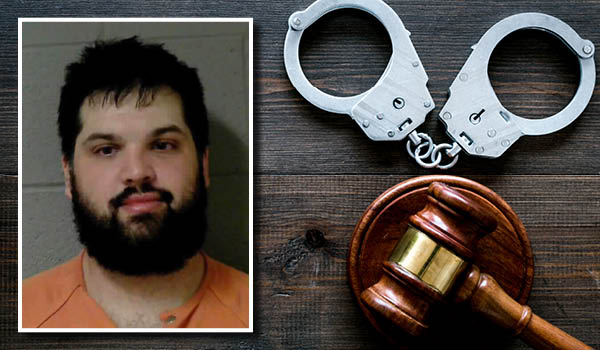 In Cass County Court Friday, a Kentucky man was sentenced to probation and jail for drunk driving and resisting police.

David Ryan Weaver, 30, of London, Kentucky, pleaded guilty to third offense drunk driving and two counts of attempted resisting and obstructing police and was sentenced to two years’ probation, 480 hours community service, 180 days in jail with credit for two days served, license revoked, $2,478 in fines and costs and $315 in restitution.

The incident occurred Nov. 14, 2020, near Marcellus. Weaver had been at an event at the VFW post in Marcellus with his aunt and uncle and drove drunk after that. He blew through road closures when he came upon the scene of a fatal accident and nearly hit two firefighters. His blood alcohol level was .194, more than twice the legal limit.

“If you thought a family member had been involved in the accident, you should have identified yourself and asked police what was going on,” Judge Herman said. “You didn’t do that and actually put firefighters in jeopardy. You gunned your engine, and they had to jump out of the way, and one had a twisted ankle.”

“You’re 30 years of age and you either stop drinking or spend a lot of time behind bars and not in them,” the judge added. “It’s time to stop. If you get out on the road drunk and kill somebody, plan to go to prison. Probation makes sense. You need extensive drug and alcohol services for your own sake and
the community’s.”

Weaver had been living in Bronson, Michigan on property his parents own and had been visiting his aunt and uncle who live in Marcellus when this incident occurred. He said he plans to return to Kentucky where he has a job waiting
for him.

• Mark Eugene Davis, 29, of Sturgis, pleaded guilty to malicious destruction of property under $200 and was sentenced to six months’ probation, $1,225 in fines and costs and $60.25 in restitution. The incident occurred Aug. 11, 2020, at the Cass County Jail when he damaged leg irons.

• Randall Clayton Dils, 50, of Mishawaka, pleaded guilty to drunk driving and attempted possession of a loaded firearm and was sentenced to one-year probation, credit for three days served and $1,025 in fines and costs. The incident occurred Dec. 15, 2020, in Edwardsburg. His blood alcohol level was .21, more than twice the legal limit.

EDWARDSBURG — This month, two area chambers partnered for a successful fundraiser. On June 10, the Cassopolis/Vandalia and Edwardsburg chambers... read more