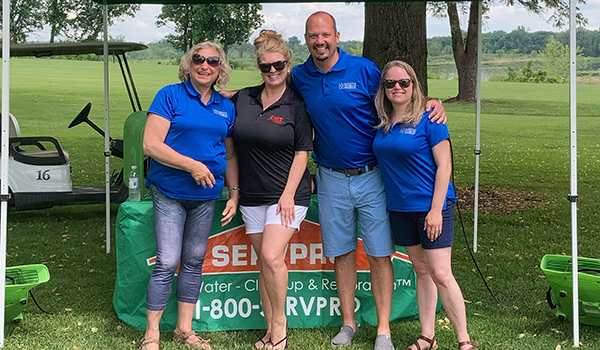 On June 10, the Cassopolis/Vandalia and Edwardsburg chambers of commerce partnered for a golf outing at Four Lakes Country Club to raise funds for the chambers. Though totals are still being counted, Cassopolis/Vandalia Chamber President Billie Hires said the event brought in roughly $7,200, with around $3,200 in expenses. The chambers will split the funds to support future chamber activities.

“It was a great day, and I believe everyone had a great time. This was our first outing ever where we partnered with the Edwardsburg Chamber and utilized Four Lakes Country Club. It was so successful that we are already making plans to do the same thing next year if Edwardsburg Chamber and Four Lakes are up for it,” Hires said. “There is so much planning that goes into these outings and so many volunteers that help make it a success. I would love to thank our team leaders that really made this happen this year — Steve Meyer and Mac Averitt, both from Servepro of Cass & St. Joseph Counties, Roy Smotherman, president of the Edwardsburg chamber and Tracy Mast from 5/3 Bank of Cassopolis. It would not have been possible without them. We are so very thankful to each and every sponsor who gave generously and donated gifts to giveaway. Cassopolis and Edwardsburg will benefit from this greatly. I hope the community will like our Facebook pages to stay on top of next year’s opportunity to join us. Thank you to Four Lakes Country Club for hosting our event. You guys were great.”