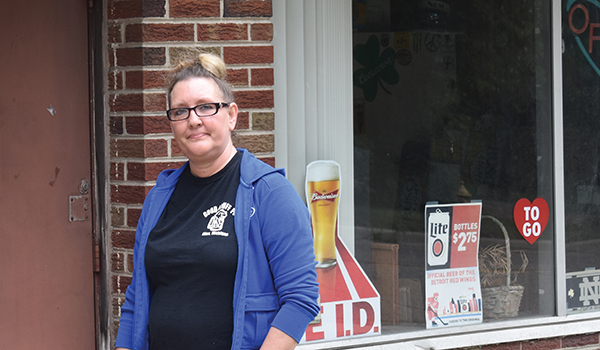 Niles bar turns to GoFundMe to recover from COVID-19 losses

NILES — Bar owners Stacy and Ed Walsh went into 2020 believing they would have their best year yet.

For the first two months of the year, that seemed to be true. Their bar, Good Anuff Pub, 1006 Lake St., Niles, was packed nearly every night of the week. Then March hit, bringing with it a pandemic and mandated shutdowns. Overnight, the Walshes’ busy bar became a ghost town.

“We kind of knew something was coming, so when the two-week shutdown came, we weren’t very surprised,” Stacy Walsh said an hour before open Wednesday. In between sentences, she kept an ear out for timers letting her know she needed to continue prepping ingredients for the Good Anuff’s famous Wing Night. “But then two weeks became six months. Then it was 25-percent capacity and 50-percent and then we were shut down again.”

Though the Michigan Department of Health and Human Services lifted COVID-19 restrictions Tuesday, allowing bars and restaurants to reopen at full capacity, Walsh said it is not enough to heal her business from the blows COVID-19 restrictions dealt it. In total, she estimates the business lost more than $180,000 in revenue during the pandemic.

“I always tell people you either sink or swim, but we’ve been floating,” Walsh said. “We really don’t want to sink.”

Throughout the pandemic, Walsh said she received little to no help from the state government.   So, this week, she decided to turn to a trusted source to help to make up for lost funds — the community.

Wednesday, Walsh launched a GoFundMe campaign titled “Help Save Good Anuff Pub.” Set to a goal of $125,000, the fund had received more than $1,600 in donations as of 4 p.m. Thursday.

“I honestly don’t even know why I did it,” Walsh said with a laugh. “It’s something I’ve been thinking about for a while because we’ve obviously had a rough year. I figured we might as well try it. We’ve been solely running on the community this entire time. We’ve had so many people in the community help us throughout the year to get us by.”

The Walshes took over Good Anuff Pub in 2015, but the bar — and the building before that — have been staples in the Niles community for decades. When the opportunity to buy the bar came up, Walsh said she and Ed knew they had to take it.

“My husband always wanted to own a bar because his family worked in them most of their lives,” Walsh said.

The Walshes bought the property on a land contract with a balloon mortgage, meaning they needed to pay a large lump sum at some point in the contract — in their case, 2020. Though Walsh said the seller is working with her and her husband, she hopes the GoFundMe can help pay off the remaining balloon.

“If we could pay it off and not have to worry about that on top of the 20 other monthly bills we have coming out of here, that would be a big chip off our shoulder,” she said.

Beyond delayed building payments, Walsh said the COVID-19 pandemic continues to cause problems for her business. Staffing and supply shortages have caused the bar to reduce its hours from 11 a.m. to 1 a.m. to 4 to 9 p.m. — making it even harder for Good Anuff to make up for lost time.

“The prices of everything have gone up, too,” Walsh said. “Fryer oil has doubled. Customers don’t get it because they aren’t in the business. They think business owners are exaggerating.”

Despite the costs to the bar, Walsh said she followed all COVID-19 protocols set by the state, unwilling to chance fines and penalties.

‘’That’s why I think we deserve [the GoFundMe],” she said. “I’m surprised at how much people have given so far.”

Though Walsh said she initially did not expect to receive many donations, she remains hopeful the GoFundMe will reach its goal. Should the campaign exceed its goal, she plans to donate to other small businesses hurt during the pandemic.

“If people can contribute, we would really appreciate that,” Walsh said. “If they can’t contribute, share it or come in and see us.”

SOUTHWEST MICHIGAN — As of Thursday, Berrien County reported 13,929 COVID-19 cases and 270 deaths, according to the Michigan Department... read more