CASSOPOLIS – Those who knew Geraldine Norwood Sims say she was “a spirited fighter and a voice of the people.” 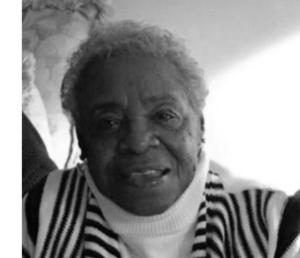 In addition to serving as an elected village official, Sims was a founder of the Red Hat Sapphire Divas Chapter in Chicago, served as president of Block Club and AFSCME Local, was a co-director of Women United to Save Our Families, and worked with the City of Chicago Board of Health and Cook County Board of Review.

According to those who worked with her in the Village of Cassopolis, Sims was active in the community and worked to make the village better by listening to residents, going into their homes and hearing what changes they wanted to see. During her time in the village, Sims was involved in the parks and helping people get grants to fix their homes.

“She was a big-hearted lady and her heart was Cassopolis,” said Frank Williams, village president pro-tem. “She will be a great loss to the community. She was a big part of the community and always made sure things would be done right for the people.”

“Geraldine was a leader and passionate about the things she believed in,” added Cassopolis Village Manager Emile Sarratore. “She was always in roles to serve the people around her because she wanted to give back to the people of the community.”

Village Council President David Johnson remembers Sims as someone who always put the needs of the village first. Though he and Sims would sometimes disagree about what that meant, he said they always had a positive relationship.

“At one meeting, her and I got into a heated debate over a topic, and when it was finished, I was nervous it would damage our relationship,” Johnson recalled. “The moment we walked out the door, she said to me, ‘do you want to go down to The Twirl and grab some fried pickles?’ Then I thought she’s over it.”

“She will be greatly missed because she was a doer for the community,” Johnson said. “She went and fought for the betterment of the community. She was a spirited fighter and a voice of the people.”