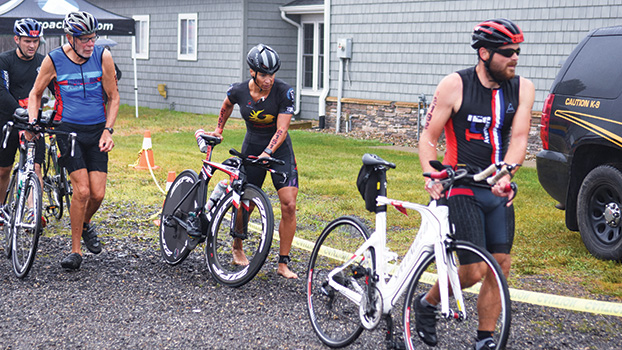 The Diamond Lake Triathlon will be July 17 in Cassopolis. (Leader file photo)

CASSOPOLIS — Diamond Lake will soon be host to athletes and their families as its annual triathlon returns to the lake next month.

This year will mark the seventh Diamond Lake Triathlon. The race will be on July 17 starting at Diamond Lake Marina on Shore Acres Road across from the lake. The race includes a 500-yard swim, 12-mile bike ride and 3.3 mile run all taking place around the lake.

“It’s good to be back racing for 2021,” said race director Joe Fazzini. “Many people are ready to get back racing, and that’s great for our event.”

Last year the race was canceled due to the COVID-19 pandemic. The triathlon was coming off of its highest numbers of racers ever in 2019 with 183 participants.

Since the first triathlon started out of a Diamond Lake resident’s backyard with 50 racers, the race has grown each year.

Racers come from as far as Indianapolis and Chicago to compete, with both first-timers and experienced athletes making the trek each year.

The race is a USA triathlon sanctioned event, so racers will be able to receive points depending on their times and placing during the race.

Returning this year will also be the club challenge, as teams of three will compete for the traveling trophy.

“Having challenges like the club challenge allows us to get more racers from other areas and has helped us grow the race over the years,” Fazzini said.

This year’s race is about more than just Diamond Lake. Fazzini said he is bringing in village participation to make the event about Cassopolis as a whole.

Cassopolis Village Manager Emile Sarratore will be the master of ceremonies and official starter for the race.

With the new improvements to Stone Lake and downtown Cassopolis, Fazzini thought it was important to blend all of the parts of Cassopolis.

“It’s no longer just about the race,” he said. “People can have a day in Cassopolis.”

Proceeds from the race will go to Challenged Athletes Foundation and Alex Stscherban.  Stscherban was injured during a triathlon and is now a quadriplegic. The triathlon has donated more than $15,000 to Stscherban over the years. The donations have helped provide Stscherban with equipment to talk and a mechanized wheelchair.

The triathlon is still looking for volunteers. For more information or to volunteer, visit diamondlaketri.com.