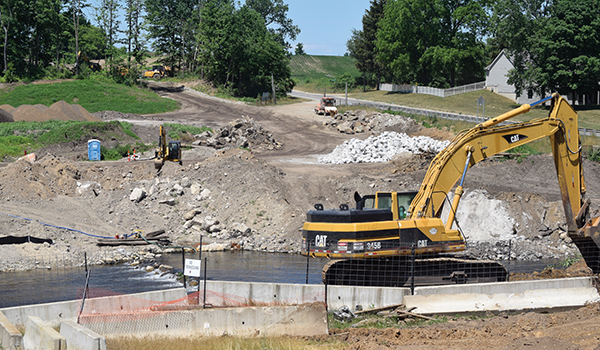 NILES – The current is moving right along at the Dowagiac River restoration project, where the Pucker Street Dam once stood just north of Niles. The riverbanks north of the bridge look more open, with less brush than in years past.

The Niles City Council voted to approve a project agreement including grant funds of up to $100,000 with the Great Lakes Fishery Trust. Jeff Dunlap, Niles city utilities manager, said the grant was another step to construct a riffle, or rockier, shallow part of the riverbed where fish can rest.

“The riffle will help deter sediment transport from the former dam impoundment area, provide in-river habitat for spawning and resting and allow free passage upstream to migratory fish,” according to the city council report, prepared by Dunlap.

The grant is about a third of the budgeted amount required to build the rock riffle.

“The Great Lakes Fishery Trust has once again stepped up to help fund this vital river improvement,” the city council report said.

In all, the Great Lakes Fishery Trust has contributed $500,000 to the multimillion dollar undertaking.

The project to remove the Pucker Street Dam began in August 2019. When it began, the dam removal was projected to be $8 million. The project grew to nearly $12 million by October 2020. In September, a further archeological component was introduced into the project as remnants of the original dam in the location, the Eli Ford Legacy Dam, were unearthed during the Pucker Street Dam and river sediment removal.

“We’re basically done north of the bridge,” Dunlap said. “There is some final seeding [of the banks] and removing the access roads.”

Temporary roads were constructed for heavy equipment to use as workers restored the riverbanks along the Dowagiac River. A thick buildup of sediment in the riverbeds around the dam was removed to give the river back its more natural flow.

“The water level is lower,” Dunlap said. “We still have another foot to go when we take those rocks we see now, and after put the riffle in. Personally, I think from a property owner standpoint, I’m very pleased with what we’ve been able to provide to each property owner on the project. [The river] has been cleaned out, and there’s river access there if they want it.”

The project did not slow down too much due to the pandemic, and remains on schedule by Dunlap’s estimation.

“We are still pushing toward the end of July to be done, except for a few things here and there,” Dunlap said. “Hopefully, nothing major comes up in the meantime. We’re very hopeful to have some type of fishing access available around September 1.”