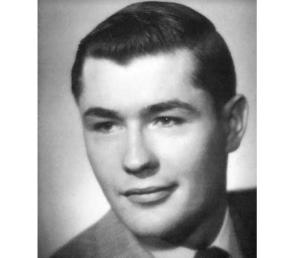 Ken was born July 2, 1927, in Grand Rapids, Michigan, to Wilhelmina (Dahlke, “Billie”) and Peter Henry Kunst. He attended St. Francis Xavier School and Catholic Central High School, graduating in 1945. During the Korean War he served in the US Army in Austria.

Ken married Patricia Ann Lang, on March 11, 1951, in Colorado Springs, Colorado. In 202,  they celebrated their 70th anniversary by doing what they so often did in recent years: sitting on the couch, holding hands, and talking about how lucky they’ve been.

Ever since he was a boy, Ken wanted to be an engineer. With the help of the GI Bill he became the first person in his family to attend college, starting at Grand Rapids Junior College and then transferring to Tri-State College (now Trine University). In 1954, he graduated with honors with a B.S. degree in mechanical engineering.

Ken spent most of his working life with Kawneer, the country’s leading manufacturer of aluminum architectural products, and his children still remember the pride they felt when they saw its logo on the doors of businesses near and far. Starting in 1955 in Niles, Michigan, he transferred in 1960 to Kawneer’s South Bend Screw Products where he became plant manager, and retired from their plant in Carrollton, Kentucky, in 1990.

Ken had a lively curiosity, and he nurtured a love of learning in his family by encouraging them to look things up, explore their interests, and try new things. Later, when his children had grown up and moved away, he would often send them articles he’d clipped from newspapers and magazines that he knew they’d be interested in.

He enjoyed figuring out creative solutions to problems, and he was great at fixing things. He could take apart anything — washer, dryer, dishwasher — and fix it completely, all without YouTube. He was a hard worker and instilled a strong work ethic in all of his children.

He had a quick wit, and he spent a lot of time having fun with his kids. He got down on the floor and played “rough and tumble” with them, he took them fishing (despite his fear of water), and he treated them to homemade popcorn and his signature “buttered Cheerios.” Every summer he

and Pat took the whole family on camping trips, and the happy memories of those trips have stayed with his children all of their lives.

He also helped his family live the lives they wanted. He taught his sports-loving daughter Marcy how to read box scores and talked with her about Janet Guthrie driving in the Indianapolis 500, “like he was telling me I don’t have to fit the mold,” she says. He loaned money to his son, Terry, so he could buy a motorcycle in high school, and Terry remembers how “that bike gave me so much freedom!” He sacrificed to send his kids to college and he supported his wife when she decided, once their kids were all finally in school, to go to college herself and become a nurse.

He was a loving grandfather to eleven grandchildren and t great-13grandchildren, with another due in August. He is also survived by his sister, Elizabeth Eckert (“Lib,” Theodore), of Glencoe, Illinois, and many cousins, nieces, nephews, their families, and friends. In addition to his parents, he was preceded in death by his brother, Eugene (“Sam”) Kunst and Sam’s wife Patti (Crist), of Northville, Michigan.

In Ken’s final years, his daughters, Kim and Amy, his son-in-law, Roman, and especially his son, Terry, devoted countless hours to giving him loving, round-the-clock care — and for this the rest of his family will be eternally grateful. The family also extends its heartfelt thanks to Healthwin Rehabilitation center, the Center for Hospice Care’s Raclin House, and to Betsy Fox whose loving care and buoyant spirit comforted us all.

Ken’s earthly body has been cremated, as he wished, and a funeral celebration will be held later this month. Please contact the family for details. In lieu of flowers, memorial contributions may be made to Healthwin (healthwin.org) and the Center for Hospice Care’s Ernestine M. Raclin House (cfhcare.org/raclinhouse).

Burial to follow in Chapel Hill Memorial Gardens. Chapel Hill Funeral Home in Osceola, Indiana is honored to care for the Kunst Family.