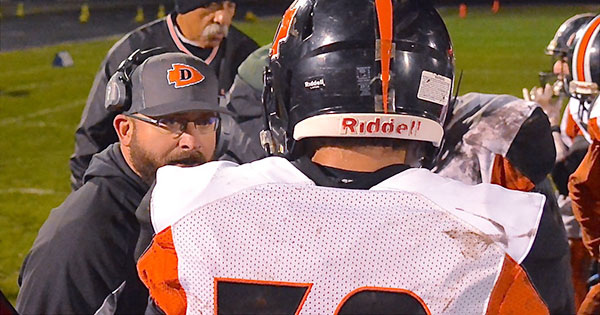 Davis, who played for Bernard Thomas and was an assistant coach under Mike Stanger and Randy Brooks, replaces Brooks, who resigned earlier this year.

Davis will begin his 14th coaching football at Dowagiac. He has also coached Rocket Football and worked at various sub-varsity levels, including middle school, over those 14 years.

According to Dowagiac Athletic Director Brent Nate, Davis picked up the reigns when Brooks resigned and kept players working throughout the transition.

“He took the bull by the horns a month ago,” Nate said. “He kept things running. He scheduled out the entire summer program. He has done everything we can ask of a coach.”

Davis said that he did that because he understands changing coaches can be difficult for players.

“I was just trying to do the best thing possible for the kids,” Davis said. “I had been through it. I went through the transition of coach Thomas to coach Stanger. I know how tough that is for seniors. It is not easy, and I did not want them to lose anything. I reassured them I wasn’t going anywhere, whether I got the head coaching job or not.”

Nate and Davis have already discussed what lies ahead for the Dowagiac program. When Brooks was hired two years ago, it was discussed that there were going to be a few lean years due to numbers. Davis said that the lean times are still here, but that is not going to keep him and his staff, which he already has in place, from working hard and preparing the players to be the best they can be.

“We discussed re-establishing the winning culture of Dowagiac football,” Nate said. “We are excited to have him running the program. He is going to be the hardest working guy in the room. He is going to surround himself with good people and do the right things on and off the field.”

Davis echoed what Nate said about his philosophy and work ethic.

“I took at the hard work that coach Stanger put into it,” Davis said about what he has learned as an assistant coach. “The constant grind of him being there first and leaving last. I want to show the kids that it is going to take a lot of work for us to turn things around, b. Being the visual leader that they need, s. Showing them the right direction to go and how to do it.”

Nate said that he received a solid group of candidates, and after two rounds of interviews, selected Davis.

Following a summer of preparation, Davis will debut as the Chieftain head coach on Aug. 26 against Vicksburg.