Saylor to run for SMC in the fall 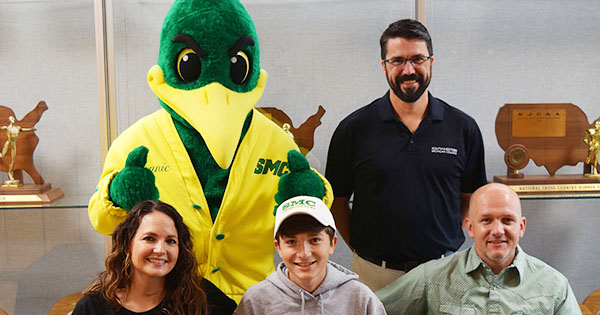 Ethan Saylor is pictured with his parents, Danielle and Jamie; Cross Country Coach Zachary Sartori and mascot Ronnie Roadrunner at his signing in the Recruiting Gallery of the Student Activity Center of the Charles O. Zollar Building on SMC’s Dowagiac campus. (Submitted photo)

Saylor, who has been logging 60 miles per week, is the middle Saylor son, between Alec, who attended SMC, and Owen, 14. Mother Danielle earned an SMC associate degree and a scholarship to continue at Indiana University South Bend. Father Jamie, senior pastor at Creekside Church, gave the invocations at SMC’s 54th Commencement May 14-15.

Saylor wants to study sports management to become an athletic director or coach. He just turned 17 in May, so will be halfway through college by the time he is 18.

He has been running competitively for almost two years at area races such as the Dowagiac Turkey Trot, RACERS Rescue Run 5K and the Superhero 5K for Berrien County Foster Care, even the five-mile Leprechaun Race in Nappanee. His personal best, 16:54, came last month at Shipshewana’s Mayfest.

“I love being around the atmosphere of sports,” Saylor, who played soccer until ninth grade, when he started running, said.

He likes the duality running affords of being a team sport at the same time individuals train on their own.

“I just keep putting goals together ahead of me and training and training to put in the work, knowing that one day it will pay off,” Saylor said. “Even when I couldn’t find races because they were canceled (by the pandemic), I could still run outside to prepare for races to come in the future. It’s going to be nice to get a day-by-day training schedule of what I should be doing. Adding back cross country was the final touch for me wanting to come” to SMC.

His discipline and motivation impressed Sartori.

“He’s been doing well. It’s very impressive to see how well he’s done on his own with little to no guidance,” the coach said. “To be able to get up to 60 miles per week and remain injury-free, he’s obviously done his homework. It’s nice to have a student of the sport. I’m excited to be working with him. He’s going to break down some doors for us, I think, year one.”

Saylor “had a very rich educational experience” at Wilder’s private school on Marcellus Highway, his dad, Jamie, said. “He’s good at learning by himself. If you have to be told everything, you really don’t learn as if you sit down and make your brain sweat. It’s good practice for college. All three boys, even the 14-year-old, can run our restaurant,” Saylor’s Front Street Pizzeria. “He works six days a week and is very active in church,” including as organist.