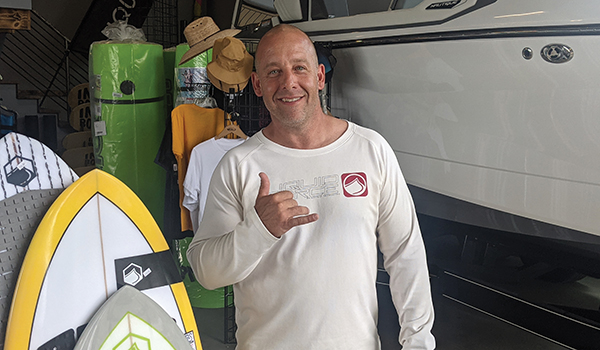 SISTER LAKES — A local sports competition is ready to make a splash again after a COVID-induced absence last year.

The Boarder Line’s annual Wakeboard Contest will take place Saturday, Aug. 7 on Round Lake behind The Boarder Line, located at 94166 County Road 690, Dowagiac.

“We waited as long as we could last year, to decide and see where things were going to go,” said Bill Boston, owner of The Boarder Line. “Unfortunately, we didn’t do it last year but with the current rules and where things are at now, we feel hopeful that we will be able to get it rolling again.”

Boston said the event typically sees anywhere from 40 to 50 contestants, who attempt as many tricks as they can in down and back rides across the lake.

Founded by Boston in 1999, The Boarder Line has been serving the Sister Lakes community ever since, selling wakeboards, wakeboard accessories, boats and more while providing services including but not limited to boat service, storage and winterization.

A seasonal business for most of its existence, The Boarder Line transitioned to full-time operations three years ago after partnering with WakeSide Marine out of Elkhart.

“The summer time is when everyone is here, and that’s when our wakeboard and water ski lessons happen,” Boston said. “It’s semi seasonal for certain parts of the business and then other stuff picks up in the offseason.”

According to Boston, the Wakeboard Contest used to be hosted twice per season before transitioning to one contest per season. The contest is available to contestants of all ages as a way to enjoy the lake. Those looking to participate can sign up at theborderline.net or sign up in person at the shop.

“Everybody’s welcome to come out and compete in their own brackets,” Boston said. “The parents come out and put out the blankets and the chairs and watch the kids ride right out here in front of the front of the shop. Everybody has a good time, and it’s a chance for the kids to kind of show off like what they’ve learned and what they’ve been practicing.”

Boston also enjoys seeing contestants and spectators from the different lakes come together for the event.

“People tend to stay within their own lake,” he said. “This is a chance for kids who are of similar ages to be in the same place, meet each other and then start kind of crossing over. They meet each other and so it promotes a really nice community of riders and boaters and everything. It’s fun.”

“She started here,” Boston said. “She started lessons with us when she was seven before moving down to Florida to hone her craft. We’ve had some other professionally-ranked riders come through here. Any time a kid takes it to another level, it’s awesome to see. You feel like you’re a part of their journey.”

For Boston and his family, summers in Sister Lakes are a time-honored tradition. Having the ability to help lake families create lifelong memories is one of his favorite things about his job.

“My parents have been coming up here since they were young,” Boston said. “My grandmother was here before that and was coming up here when she was young. It’s a family tradition around here and creating that family history seems to be a really strong component around the Sister Lakes. It’s cool to see different ages and generations coming through, and I enjoy the fact that we can provide an opportunity for everybody to come together and celebrate being out on the water and enjoying boating.”

DOWAGIAC — Longtime Dowagiac resident Walter Swann had some extra pep in his step Thursday afternoon — and for good... read more