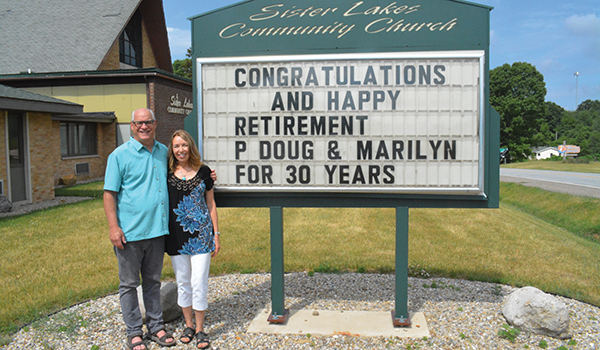 SISTER LAKES — After 30 years of serving the congregants at Sister Lakes Community Church, pastor Doug Cuthbert and his wife, Marilyn, will be saying goodbye.

Doug is retiring from his position as senior pastor of SLCC, 67119 M-152, Dowagiac, and Marilyn from her teaching position at Grace Christian School in Watervliet after 15 years.

“Part of what we want to accomplish is to be able to see our grandchildren,” Marilyn said. “We didn’t have much time to spend with friends and family. We’re looking forward to the opportunity to spend more time with them.”

June has long been an important month for both the Cuthberts and the church.

“A lot of things coincide with this month,” Marilyn said.

Born and raised in Eau Claire, Doug and his family began attending SLCC when he was 15 years old, and it was then when he said he came to know Christ in a very real way. He graduated from Eau Claire High School in 1973 and went on to graduate from Spring Arbor University in 1978 with a philosophy/religion degree and married Marilyn that same year.

The Cuthberts moved back to Sister Lakes in spring 1979 when Doug was named the church’s program development director. The couple was there for three years before Doug pursued seminary school at Grace Theological Seminary in Goshen. Upon graduating with his Master’s in divinity, theology and counseling, Cuthbert spent six years pastoring in Goshen before moving to Alaska to become a marriage/family therapist for three.

In June 1994, the Cuthbert family was called back from Alaska after Cuthbert accepted the senior pastor position at SLCC.

“Sister Lakes pursued us because they really wanted someone they knew there,” Marilyn said. “We’d had our four kids, and we were just getting established in Alaska after three years, but we felt after a lot of prayer and talking that this is where God wanted us to work.”

The couple was able to provide the church with the stability it needed. Three years later, the church hired Scott Stanbaugh as a second pastor for the congregation.

“It was a very big movement in a positive direction for the church,” Doug said. “He’s been here for 24 years. We have 51 combined years of ministry here together and that has been one of the things that has, in my mind, transformed the church is the stability that the pastors have brought in the consistency of teaching the word and caring for the people involved in the community.”

Since returning to Sister Lakes, Cuthbert and his team have emphasized the importance of what he calls “relational ministry”.

“We have really tried to come alongside people and their situations, wherever they’re at and encourage them,” He said. “Our programs are all designed around the concept that relationships are important. How can we build relationships? How can we build education? How can we build vision in those areas? Those are all things that are going to continue without me here and that was really part of the foundation.”

The Sister Lakes congregation is composed of both locals and vacationers from the Midwest and beyond, something Doug believes is unique to churches in the area.

“On a Sunday morning, when Pastor Scott and myself preach our message, we say to ourselves ‘take this message wherever you want to take it,” Doug said. “It could go to places like Ann Arbor, Chicago, Detroit and so on. It isn’t unusual for us to get emails from those places. Our ministry here isn’t just local but it’s very regional as well.”

SLCC has stressed the importance of community outreach. The church utilizes its 48 acres of property to host community sporting events, blood drives, trunk or treat, cardio drumming and was even a vaccination site.

“We’ve done some outdoor church services in the summer,” Marilyn said. “We had an outreach to first responders just a couple of weeks ago. The community/worship center has really allowed us to become more community-oriented.”

The duo has overseen the church’s expansion, as congregants raised more than $160,000 to go towards the construction of its community/worship center, which opened in 2004.

“We found the versatility of this space to be very helpful,” Doug said. “It seemed to be more community-friendly and you could be more casual coming to church.”

“We didn’t build it with the intention of it being used for worship,” Marilyn said. “But once it was built and we were big enough as a congregation to need more space, we felt like it was the wise thing to do.”

While their time with SLCC is coming to an end, Doug and Marilyn will be keeping themselves busy with their next adventure.

“It’s a ministry that has 7,000 pastors on their mailing lists and 20,000 churches,” Doug said. “We’re just hoping to come alongside the staff that’s already there to help build revitalization retreats and to help with personal counseling. Want to be a safe space for pastors to go and talk. They don’t often have that ability when they’re leading their church, so that’s what we’re trying to do with Life Action Ministries.”

SLCC will be hosting a retirement celebration event for the Cuthberts from 2 to 5 p.m. Sunday at the church. Congregants and community members are welcome to attend.

The Cuthberts have spent decades building relationships with congregants and community members. While the church has grown over the course of their time with the church, the couple believes the progression will continue long after they’re gone.

“It’s not about us,” Marilyn said. “It’s about the team. Everybody that has given input, helped out or volunteered, that’s what makes a difference. The fact that one person leaves should not leave a huge gap because there are other people who have always been a part of everything.”