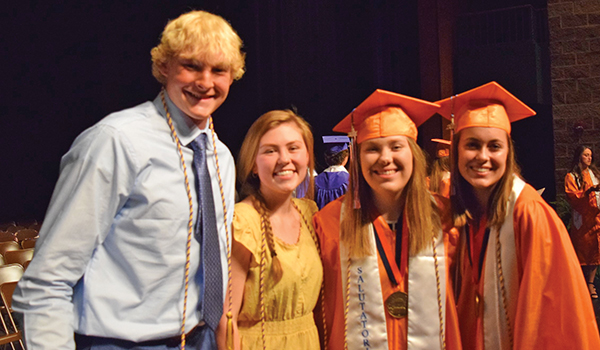 EDWARDSBURG — The Edwardsburg Lions Club is celebrating 75 years of Lionism for the Edwardsburg community. Over the years, the club has provided the community with eyeglasses, hearing aids and helped both the schools and the Edwardsburg Sports Complex.

Now, the club is helping area students achieve their educational dreams in the name of a late member.

The award is named after Herbert Stiffler, who died in 1994. Since his death, the club has been donating scholarships in his name.

In addition to the Herbert L. Stiffler Award, the Knights of Columbus awarded a Leo student, a youth program through the Lions Club, with a $500 scholarship, as well.

“The Knights are giving back to the Edwardsburg Leo Club for helping with their dinner fundraisers that they offer to the public during the year,” said Tanda Stiffler, Edwardsburg Lions Club members and Leo advisor. “The Leos love to be a part of serving dinners and helping to clean up afterwards.”

The recipient of the award was Edwardsburg High School salutatorian Elizabeth Naas.

“The Edwardsburg Lions Club wishes the students the best for their next chapter of their life and hope wherever their end up being after college that they will continue to be involved in service to their community,” Stiffler said.