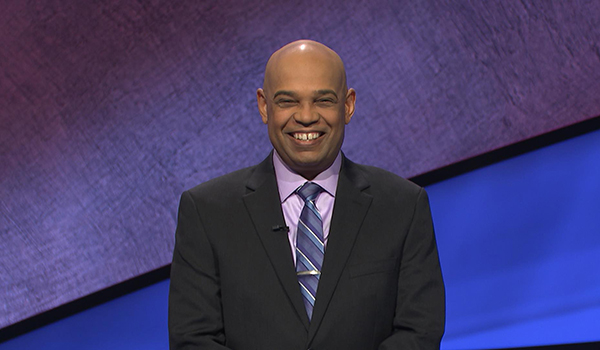 CASSOPOLIS — Monday, Cassopolis native Derek Allen’s phone was constantly abuzz as friends, family and long-lost acquaintances reached out to let him know he was appearing on their television screens.

“It’s very surreal,” Allen said with a laugh. “I heard from people I literally haven’t heard from in 30 or 40 years. It was nice, the reactions from people. It was really cool, but at the same time, it was a kind of tiring day.”

Allen, 51, now of Mishawaka, appeared on beloved trivia game show “Jeopardy!” Monday evening, ultimately coming in third place. A Cassopolis High School graduate, Allen is now an accountant and works for Milestone Contractors. In his spare time, he creates crossword puzzles, three of which have been published in the New York Times.

Filmed in March with celebrity guest host Mayim Bialik, Allen played a competitive game throughout the show’s run time. Going into Final Jeopardy with a question about golden age actresses, Allen had $11,000. He bet it all — and lost it all. After giving an incorrect answer, he came in third place, taking home $1,000 for his performance.

“It was all or nothing,” he said. “It would have taken a really good guess for me to win. I figured there was no point playing for second place, so I decided to go wide with it.”

Though he did not take first place, Allen said appearing on “Jeopardy!” was a valuable, one-of-a-kind experience.

“It was a ton of fun, and I got to meet a lot of cool people,” he said. “It was a fantastic experience.”

Allen said he has been a lifelong “Jeopardy!” fan and even had the opportunity to appear on “Sports Jeopardy!” an adaption of the game show that ran from 2014 to 2016. Though he has been watching the show for decades, Allen said nothing could have prepared him for the experience of appearing on the show.

“You really can’t prepare,” he said. “With so many of the questions, you either know it or you don’t. I can’t remember any of my preparations helping. It just goes so quickly. It’s all a blur.”

Throughout his experience on the show, Allen said he did not forget his Cassopolis roots. Though he has not lived in the village since the 1990s, he asked to be introduced as “from Cassopolis, Michigan.”

Allen said he was glad he had the Cassopolis community’s support behind him as his episode aired.

“Cassopolis is very small, tight-knit,” he said. “A lot of people leave Cass, myself included, but you can never cut those Cass ties.”

CASSOPOLIS — Over the weekend, Cassopolis residents celebrated a project years and millions of dollars in the making in style.... read more