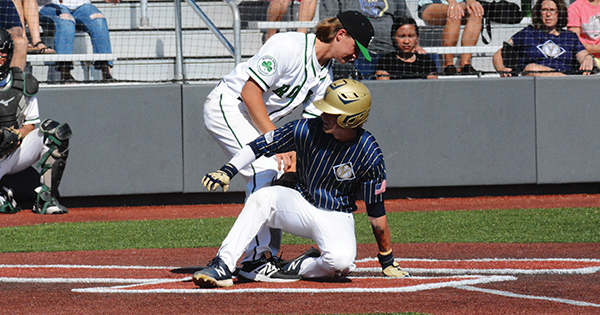 Niles was bested by Lakeshore 5-3 in the Division 2 district championship game at Stevensville, while the Edwardsburg baseball team lost a close contest to the Lancers 6-5 in its district semifinal.

The wins gave Lakeshore its fourth straight district baseball title. The Lancers move on to face Otsego in regional semifinal play next week.

“I’m proud of the guys,” said Niles coach Mike Vota. “They put together a pretty good year, and that’s the thing we talked about. They changed the culture of the program, and now they’ve set the bar high for the guys behind them. Winning is the expectation, and that’s what we want.”

The Vikings made it to the championship round after defeating Berrien Springs 12-2 in the district semifinal. In the district championship game, Niles took an early lead in the first inning. A Gage Vota single brought Jadon Hainey home to put the Vikings up 3-1 after one inning of play.

“Pitchers sometimes need to settle into a game, and you need to get on them in the first inning because they’re up in the zone a little bit,” Vota said. “We were attacking the baseball, and we put some balls in play very hard. They gave us a couple extra outs and that helps, too. We took advantage of it.”

Lakeshore responded in the third inning when a Riley Adams double scored two runs and a Grant Ruddell double scored one run to give the Lancers a lead they would not relinquish.

Noah Chase was the winning pitcher for Lakeshore. The ace allowed five hits and three runs over seven innings, striking out seven.

Niles pitcher Chase Lotsbaich allowed five hits and four runs in four innings while striking out two and walking one. Jadon Hainey led Niles with two hits at the plate.

The Lancers tallied nine hits in the game, with Zach Warren, Ryan Kolessar and Adams each collecting multiple hits.

“They’re fast,” Vota said. “They’re athletic. We knew that going in and early we didn’t make a couple of plays that we needed to and that led to some runs and some extra pressure on our defense and stuff like that. That’s the thing that they bring. Their pitchers throw strikes, and they run well.”

The Vikings finish the season with a 22-11 record, including 9-2 in their last 11 games. In a season filled with uncertainty, Vota is proud of the way his team handled the adversity.

“These guys had to go in every Friday and get COVID tested,” Vota said. “We were backed up to start the year. We had four days of practice before we got going, and we went through a rough patch in the middle of the season. They turned it around and kept playing hard. They’re just a tough group of kids. They battle, and they’re going to be great adults because they know how to battle.” 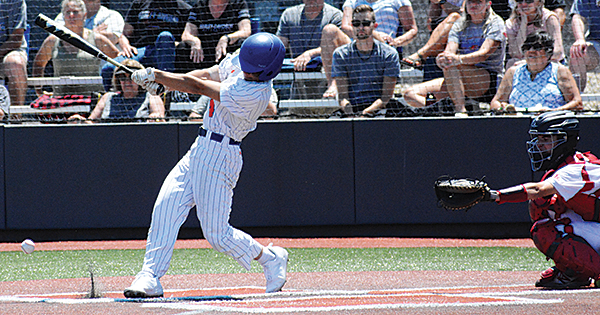 Edwardsburg lost to the host Lancers 6-5 in the semifinals. (Leader photo/MAXWELL HARDEN)

The Lakeshore baseball team had the last laugh against Edwardsburg in the district semifinal game. With the game tied at 5-5 in the bottom of the sixth, a Zach Warren sacrifice fly scored the game-winning run for Lakeshore to end Edwardsburg’s season.

The Eddies finish with a 26-5 record.

“They battled the whole game,” said Edwardsburg coach AJ Gaideski. “We didn’t make plays when we had the chance to make plays. If we made the plays we made all year, we’re in good shape, but they’re defending district champs or for a reason. The kids battled. They hung tough, and every time they got a lead, we would come back, and every time we had a lead, they came back.”

The Eddies took a 2-1 lead in the second inning when Connor Ostrander drew a walk to score a run.

Lakeshore scored three runs in the fourth inning to go up 5-2 before the Eddies responded in the fifth with three runs of their own, capped by an Ostrander sacrifice fly to bring Colvin home to tie the game at 5-5.

“We charged right back,” Gaideski said. “We had a chance to take the lead, but the ball bounced a little differently. That’s what happens in baseball.”

Riley Adams got the win for Lakeshore by striking out two batters and allowing three runs on four hits in two innings. A.J. Obren took the loss on the mound for Edwardsburg, allowing six runs on nine hits while striking out three batters in six innings.

Patrick Szlanfucht, Logan McColley and Ethan Cebra each racked up multiple hits for Edwardsburg, with Szlanfucht leading the way with three.

The Eddies graduate three seniors from this year’s team in Nate Dalenberg, Ethan Cebra and Tabor Lock. Gaideski is proud of the way his team navigated a season like no other.

“They handled it great,” he said. “They came in and worked hard. They did what they were supposed to do with testing. There were no issues with it; they just handled it and went about their business.”