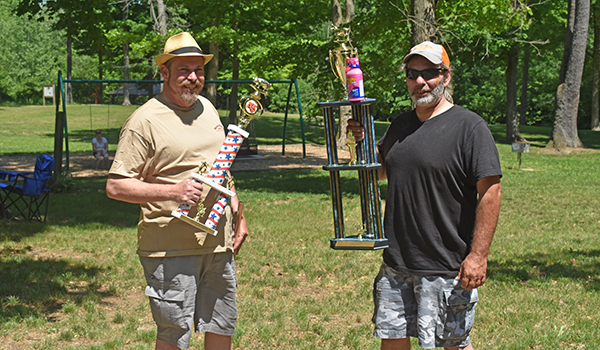 NILES — The smell of greasy bacon wafted through Arthur Dodd Memorial Park this weekend as hungry residents settled in for a celebration of their favorite culinary delight.

“It’s bacon everything,” Rieth said as a pig-shaped piñata filled with bacon-flavored taffy swayed above his head. “As you can see, we love bacon.”

In addition to the cook-off, the party was also host to a raffle that featured bacon-themed prizes, a bacon walk and a game of “Pin the Bacon on Bruce and Jay.”

Rieth, 48, and Allison, 49, founded the Bacon Party many years ago as a birthday event for the two. Four years ago, they opened up the event to the public. Since then, the event has grown to include more than 50 dishes.

In 2020, the Bacon Party was hosted virtually due to the COVID-19 pandemic. Saturday, Rieth said he was excited to host the event again in person.

The winner of this year’s cook-off was Tammy Bush, who brought in a simple plate of plain bacon.

“All the stuff here is bacon with this, bacon with that. She brought just bacon,” Rieth said. “Jay and I agreed that’s the best way to eat bacon.”

“That’s what this is about,” Allison added.

The winner of the worst dish went to a contestant who submitted a plate of vegan radish bacon. For their efforts, the contestant was awarded a trophy with “what were you thinking?” written on it.

“We knew right away that would be the worst,” Rieth said with a laugh. “It’s all just fun, and it’s mostly tongue in cheek.’

Both the best and worst dishes went home with a bottle of Pepto-Bismol.

Despite the competition, which both Rieth and Allison said is all in good fun, organizers said Bacon Party is truly about community connection.

“The gathering, the coming together is really what it’s all about,” Allison said.

“Bacon is just the reason,” Rieth added. “The reality is that it is just nice to get together with people, especially after this long pandemic. It’s an excuse to be around each other. The bacon is secondary to being around friends and meeting new people.”