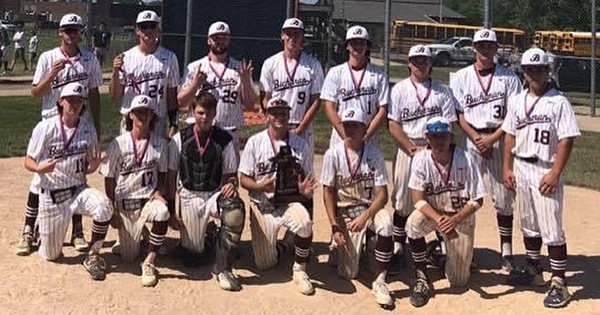 BRIDGMAN — There is an old adage in sports that you cannot lose if you do not let a team score.

The No. 1-ranked Buchanan Bucks took that to heart as Jack Branch and Matthew Hoover tossed shutouts to lead their team to the Division 3 District championship in Bridgman Saturday.

The district title was the sixth straight for the Bucks.

Branch tossed a one-hitter in Buchanan’s 3-0 win over Coloma in the semifinals. Hoover tossed a two-hitter against arch rival Brandywine in the title game, which the Bucks won 8-0.

Buchanan now advances to Wednesday’s Division 3 Regional, where it will face Lawton on the same field in Bridgman.

Hoover went the distance, striking out 10 and allowing just one walk.

The Bucks scored four runs in the fourth inning to snap a scoreless tie and take charge of the contest.

Hoover was hit by a pitch to start the inning, and then moved to third on a double by Branch. Macoy West’s sacrifice fly made it 1-0 before a single by Murphy Wegner scored Branch to make it 2-0. Levi Zelmer’s fielder‘s choice ground ball to second allowed Paul VanOveberghe and Deagan Huffman to score.

The Bucks (31-2) would add two runs in the sixth and two more in the seventh to cap the scoring.

A four-run third inning erased a 3-2 deficit for the Bobcats in the first semifinal Saturday.

Brandywine (24-9) had eight hits in the game, including two each from Gouin, Jamier Palmer and Hulett. Palmer doubled for the Bobcats.

In the third inning, Gouin singled. With one out, Jakob Luczkowski was hit by a pitch, and Barrier drew a walk to load the bases. A pair of Panther errors would allow Gouin to score, while Luczkowski would also score on an error to give Brandywine the lead for good. Hulett followed with a run-scoring single to make it 5-3.

A two-out, bases-loaded walk to Andrew Schadler extended the Bobcats’ lead to 6-3.

Branch struck out eight and walked just one in, picking up the win over the Comets in the semifinals.

Buchanan finished with seven hits, including two by Keeghan Pelley, who doubled. Drew Glavin and Cade Preissing both drove in runs.

Leading 1-0 heading to the fourth, the Bucks scored a pair of runs, as with one out, Wegner and Huffman had back-to-back singles. One out later, VanOverberghe, a courtesy runner, would score on an error. Glavin singled home the final run of the contest.