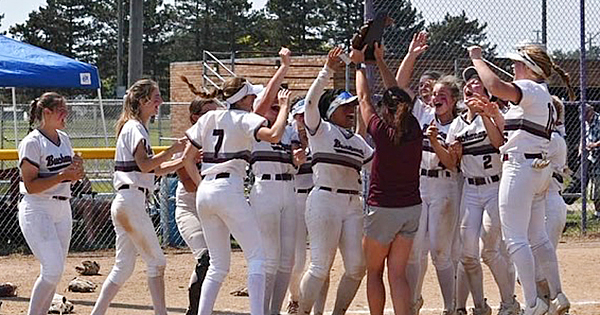 BRONSON — Like its baseball counterparts, the Buchanan softball team pitched a pair of shutouts to win the Division 3 District championship Saturday.

The Bucks (32-4) routed Constantine 17-0 in the semifinals before shutting out host Bronson 6-0 in the championship game. Buchanan now advances to the Centreville Regional Saturday, where it will face Watervliet in the second semifinal, scheduled to start at noon.

Delton-Kellogg will take on Schoolcraft in the first semifinal at 10 a.m. The championship game is set for 2 p.m.

Sophia Lozmack sent the distance in the title game as she gave up five hits and struck out six.

The Bucks finished with 11 hits against a pair of Vikings pitchers, led by Lozmack, who was 3-for-3 with a double. Hannah Herman was 2-for-4 with an RBI. Hailee Kara, Camille Lozmack and Sage Pruett also drove in runs.

Buchanan scored single runs in the first and seventh innings, while it scored two runs in the second and fifth innings to account for the scoring.

“Bronson played us tough,” said Buchanan Coach Rachel Carlson. “We were in a few positions to bust the game open but didn’t seem to get a timely hit in those instances, so we did what we have been doing all year — Sophia threw exceptionally and our defense made great plays. We have made it a goal to be focused, energetic and team-minded for this tournament. On Saturday, we did just that. These girls have worked very hard this year with this district championship goal in mind, and I couldn’t be more thrilled that they went out and got it.”

The semifinal against Constantine was over after just one inning of play, as the Bucks scored 12 runs. Buchanan added five more runs in the second to extend its lead to 17-0. The game ended after three innings due to the mercy rule.

Lozmack started the game and picked up the win as she worked one inning and struck out three. Camille Lozmack pitched the final two innings, allowing one hit with five strikeouts.

The Bucks played long ball against the Falcons. Buchanan had two doubles and two home runs as it finished with 16 hits.

Herman homered and drove in three runs, while Kara was 2-for-3 with a home run and four RBIs. Brooke Atkinson went 3-for-4 with a double and an RBI. Alea Fisher was 2-for-2 with a double, while Camille Lozmack and Sophia Lozmack were both 3-for-3. They combined to drive in five runs.

Buchanan now turns its focus to the Panthers, who set a new school record for wins with its 33rd Friday night. Watervliet won the district title by routing Coloma 14-3 in five innings. The Panthers advanced to the finals with a 19-0 win over Fennville.

One of the key players for Watervliet is freshman Abby Whorton, who will remember the district championship game for quite some time after hitting a three-run home run and a two-run double in the same inning. She had four hits total, including another double and a single.

In the circle for the Panthers, Haiden Edelberg tossed a two-hitter.

Carlson said for her team to come away with a regional championship, it must do the things that got them this far.

“To win the regional at Centreville this weekend, we will need to continue to play great defense and be dominant in the circle, and then our swings will need to carry us,” she said. “Watervliet has a great record and will pose a challenge as they sound fundamental and speedy. We will work this week on small scenarios and staying tuned up offensively. We want to be focused and connected as a team so we can be our best Saturday.”