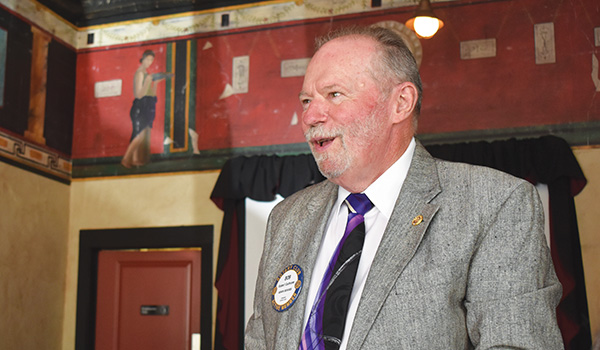 DOWAGIAC — It’s been a whirlwind of a year for Dowagiac Rotary Club president Bob Cochrane.

Cochrane, who began his term in July of last year, is entering his last month as club president.

Cochrane’s primary task during his term was keeping the club afloat amid the ongoing COVID-19 pandemic. The meeting location as well as the meeting format has changed several times over the course of the past year, with the club shifting from in-person meetings to virtual meetings several times due to the fluid nature of health department guidelines.

“It’s obviously been a big challenge in a lot of aspects,” he said. “It’s been a challenge just to keep the group together because we had several months when we couldn’t meet at all and times when we met just online.”

With the situation able to change at the drop of a dime, Cochrane appreciates club members’ flexibility and willingness to help.

“What I’m appreciating is how helpful and supportive club members have been,” he said. “When we needed something done, I could call on somebody and they would do it. It’s been very, very good from that perspective.”

Several of the club’s annual projects and functions have been postponed until things improve. In an effort to support its community, the club reached out to local food programs such as Feed the Hungry and ACTION Ministries and submitted charitable donations.

“When we realized how things were going, we changed our charitable focus for the year and got involved with local food programs,” Cochrane said. “We did that and I think it was an excellent way for us to continue to support the community in a time when you couldn’t really be out there doing things. That worked out well for us.”

Cochrane’s last meeting as club president will be Thursday, June 24. While his term may be coming to an end, Cochrane is happy to be able to conduct his last few meetings as club president in-person at the club’s home base of Front Street Crossing in downtown Dowagiac.

“I am so happy that we’re able to get back together in our familiar space,” he said. “I think pretty soon we’ll be done with the Zoom meetings and we can just go on like we have before. That’ll be wonderful.”