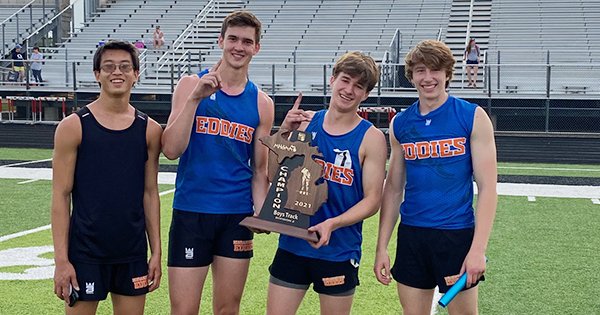 Pictured is the Edwardsburg 1,600-meter relay team, which will compete in the Division 2 state finals Saturday. From left are Jayden Slough, Jacob Pegura, Warren Fessenden and Bryce Backus. (Submitted photo)

EDWARDSBURG — Athletes from Edwardsburg, Buchanan, Niles and Cassopolis are ready to compete in the state track finals Saturday.

Edwardsburg and Niles will send their competitors to Zeeland High School for the Division 2 meet, while Buchanan will compete in the Division 3 meet at Jenison High School. The Division 4 state finals are being hosted by Baldwin Middle School in Hudsonville.

Edwardsburg’s Luke Stowasser will enter Saturday’s meet with the top jumps in both the high jump and long jump. Stowasser set new school records in winning the regional titles with leaps of 6-10 and 22-6.5, respectively. The Eddies were the regional champions.

Also qualifying for the state finals from Edwardsburg were Warren Fessenden in the 400-meters, as well as the Eddies’ 400- and 800-meter relay teams. Fessenden posted a time of 51.37 at the regional. The top time coming into the state meet is 49.46.

Fessenden will be a part of the 400-meter unit, which also includes Isaiyah Swartz, Brett Allen and Briaden Domer. They posted a time of 44.64. The best time coming into the finals is 43.30.

Stowasser is a member of the 800-meter team, which also includes Fessenden, Bett Allen and Domer. That squad ran a 1:32.73 at the regional meet. The best time heading into the state meet is 1:30.57.

Edwardsburg will have Jessica Ferguson representing its girls team, as well as its 400-meter relay team of Alayah Calhoun, Danni Purlee, Amelia Colvin and Emmalee Hayden. Ferguson will compete in the 400-meters. She posted a time of 1:02 at regionals. The top time heading into the state meet is 59.09.

Niles’ Marika Ruppart was the regional champion in the high jump with a height of 5-foot-4. That ties her for No. 1 heading into the finals. 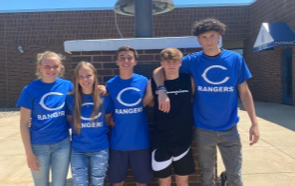 Lauren Strefling will represent Buchanan in the girl’s portion of the meet in the long jump. She jumped a distance of 15-7.5 at the regional. The top jump coming into the state finals is 17.1.5.

Cole Millirans and Daishean Jamison will compete in a pair of events for the Rangers at the Division 4 finals.

Katherine Gregory, who jumped 4-10 in the high jump at regionals, will compete Saturday, where the top jump heading into the meet is 5-3.

Berrien County Board of Commissioners to return to in person meetings

BERRIEN COUNTY — The Berrien County Board of Commissioners is moving to resume in-person meetings more than a year after... read more