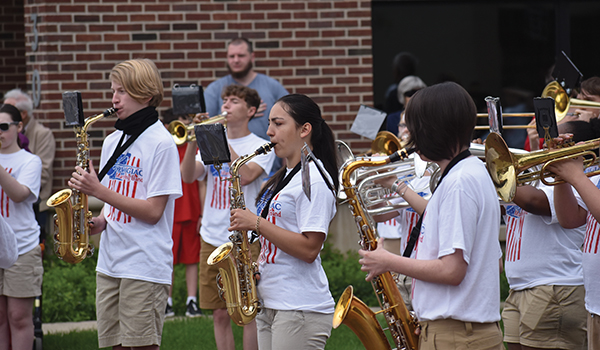 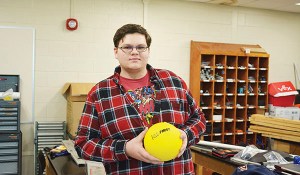 DOWAGIAC — Before taking to the streets to perform in Monday’s Memorial Day Parade, the Dowagiac Union High School marching band took a moment to honor a fallen Chieftain.

The band, under the direction of Shane Oakley, paid tribute to DUHS alumnus and former band member Carson Ausra with a performance of “Take Me Home Country Roads” by John Denver on the lawn in front of ACTION Ministries, 301 Main St.

Ausra died last week after a months-long battle with cancer.

“I knew I wanted to do something to honor him,” Oakley said. “After thinking about the position of the band in the parade and knowing the community would be there and that alumni may be in the area, I thought it would be a good time to do it. Not to mention being able to do that outdoors and not have to worry about COVID.”

Ausra graduated from Dowagiac in 2019 and Southwestern Michigan College in 2020. In high school, he played the mellophone in marching band, French horn in concert band and trumpet and bass guitar in jazz band. Ausra was also a member of the Dowagiac High School Robotics Team, where he eventually became the lead programmer.

Oakley’s first year as the director of bands at DUS was 2018, Ausra’s senior year. He may have been his teacher for just one year, but Oakley said Ausra made a lasting impression.

“If I needed something done, I could always count on him,” Oakley said. “I liked seeing him interact with people he was close with and how friendly and respectful he was with those he didn’t know as well. He was a warm, caring person.”

Carson’s mother, Dawn Ausra, appreciated the band’s tribute to her son as well as the outpouring of support from the community. Dawn is a former vice president and president of Dowagiac Band Boosters.

“It’s been a little overwhelming,” she said. “It just shows how he touched the lives of his teacher and impacted friends and family with his smile and sense of humor. He had his own style. He was known for his Hawaiian shirts, knowledge of Marvel, “Star Wars” and “Star Trek.” If he didn’t know how to do something, he researched it. He was very bright when it came to computer programming and electronics.”

Oakley said he chose the song “Take Me Home Country Roads” because it was a song Ausra and his friends could often be heard singing passionately.

“Every football game or bus ride, Carson and his friends liked to burst out in song and sing it as loud as they possibly could without regard for what is going on around them,” Oakley said. “The timing wasn’t always appropriate, but at the same time, they reminded me of what band is all about. They were a group of friends being silly and enjoying time in their position on the program.”

DOWAGIAC — The first week of June brings with it the return of one of the area’s most anticipated summer... read more