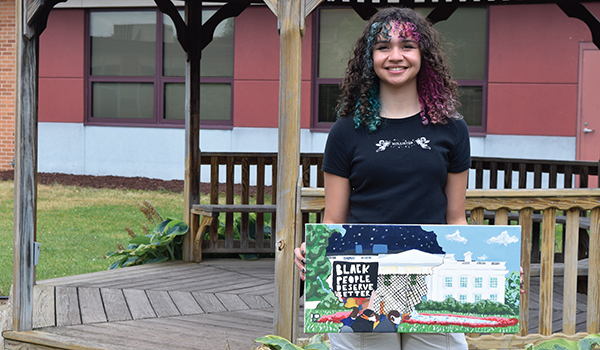 NILES – A Brandywine Middle/High School student has placed as one of the top 30 finalists in a nationwide call for art submissions featuring The White House.

Allie Curtis-Lee, eighth grade, learned through an email that her painting, “The Need to Mend,” was chosen out of 500 submissions to be in the top 30 finalists, and top 10 in her grade category. The call for submissions by students from kindergarten to 12th grade was made was made by The White House Historical Association in its National Student Art Competition “The White House: An American Story.”

Curtis-Lee interpreted the theme considering both recent and more distant history. She spent two and a half months perfecting her painting.  She wanted to show a diverse community and viewpoint as a part of the White House through her artwork.
“I needed to represent issues that are going on today, as well as what we could be,” Curtis-Lee said. “I personally have an issue with how people of color in America are being treated. I wanted to represent that in my art.”

Her painting depicts a chain link fence separating the white house from people wearing face masks during a protest, while one subjects holds up a sign reading “black people deserve better.” The scene is juxtaposed by a more traditional representation of the White House.
“[This is] a way for me to express myself, and my emotions, about America today,” Curtis-Lee said.

Her work of art features both what she called a “glamorized” version of the White House during the daytime, and a shattered image of it at night.

“The history of the White House is really glamorized as where the president lives. It’s a landmark, but it was built by slaves. There’s more to the White House than what is normally expressed to kids,” Curtis-Lee said. “A lot of the time, America’s history is sugar coated. [This is the] White House and what’s represented in the media, versus what is actually happening.”

She shared the recognition with her art teacher, Rory McLaughlin, who had been one of two educators to share the call for artwork with students. The other educator who shared it teaches social studies.

“As far as I know, she was the only one to take the time to [paint] something. She did everything herself,” McLaughlin said. “Next thing I knew, she was running up with a big smile on her face saying she was in the top 30. It’s great they recognized her.”

Curtis-Lee said she had been working on art since at least kindergarten.

The recognition is a welcome announcement to McLaughlin, who said art class has been very different over the past year.

“It’s been hard because kids can’t share supplies. I got every kid a sketchbook and pencils. I let them bring in their own supplies, as long as they didn’t share with anybody,” McLaughlin said.

Sharing information and opportunities with other educators helped lead to the collaboration of history and artwork in the White House Historical Association’s National Student Art Competition.

Students in each grade level category, kindergarten through third grade, fourth through eighth grade, and ninth through 12th, who place first, second or third, are eligible for cash prizes up to $1,000.

Curtis-Lee hopes to learn her final placing in the competition in July, when the association celebrates Former First Lady Jacqueline Kennedy’s birthday. Kennedy founded the White House Historical Association in 1961.

SOUTHWEST MICHIGAN — As of Wednesday, Berrien County reported 13,209 COVID-19 cases and 267 deaths, according to the Michigan Department... read more