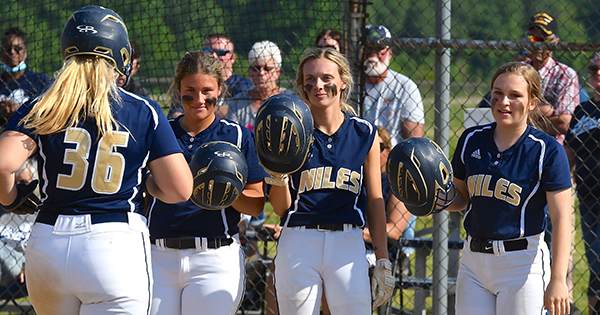 Mya Syson is greeted by her teammates after hitting a home run against Paw Paw Tuesday. (Leader photo/KELLY SWEENEY)

Across town, host Brandywine was blanked by Centreville 10-0 in a Division 3 pre-district contest.

After a scoreless first inning, Niles (23-11) sent 11 hitters to the plate in the second inning.

With two outs, Amira Lee and Chevelle Jaynes had back-to-back singles, the second of which scored Chloe Hargreaves, who had reached base on an error. A double by Bailey Bickel made it 2-0 before a two-run single by Taylor Young, back-to-back walks, and a double by Mya Syson made it 7-0.

Paw Paw (14-18) scored its only run of the game in the third inning on a walk, hit by pitch, a walk and a sacrifice fly.

The Vikings responded with a three-run home run by Syson in the bottom of the fourth. Niles scored its final run on a single by Jaynes.

Syson allowed one run on five hits with 10 strikeouts. Hannah Mellinger took the loss for the Red Wolves as she gave of four earned runs on 12 hits.

Offensively for Niles, Syson was 2-for-3 with six RBIs. Young, Lee and Jaynes all had two hits. Bickel and Young both finished with a pair of RBIs.

Niles advances to the district semifinal at 10 a.m. Saturday. The Vikings will face Dowagiac, with the winner moving into the finals, which are scheduled for 2 p.m. 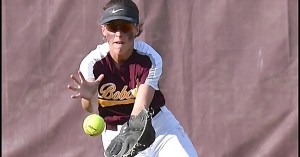 Brandywine was eliminated from the state tournament by Centreville Tuesday. (Leader photo/KELLEY SWEENEY)

Visiting Centreville (24-5) scored eight runs in the first two innings and never looked back in advancing to the semifinals at Bronson. The Bulldogs face the host Vikings at 10 a.m., advancing to the 2 p.m. championship game.

Brandywine (8-17) finished with just two hits off of Faith Edwards.